According to a new OpenSignal report, South Korea is well ahead of any other country in the world when it comes to Download speed experience, with average speeds topping 50 Mbps.   Only Norway comes close, with even third-placed Canada a clear 10 Mbps behind.  OpenSignal saw a huge range of scores in this metric, with the lowest average score being less than 2 Mbps. 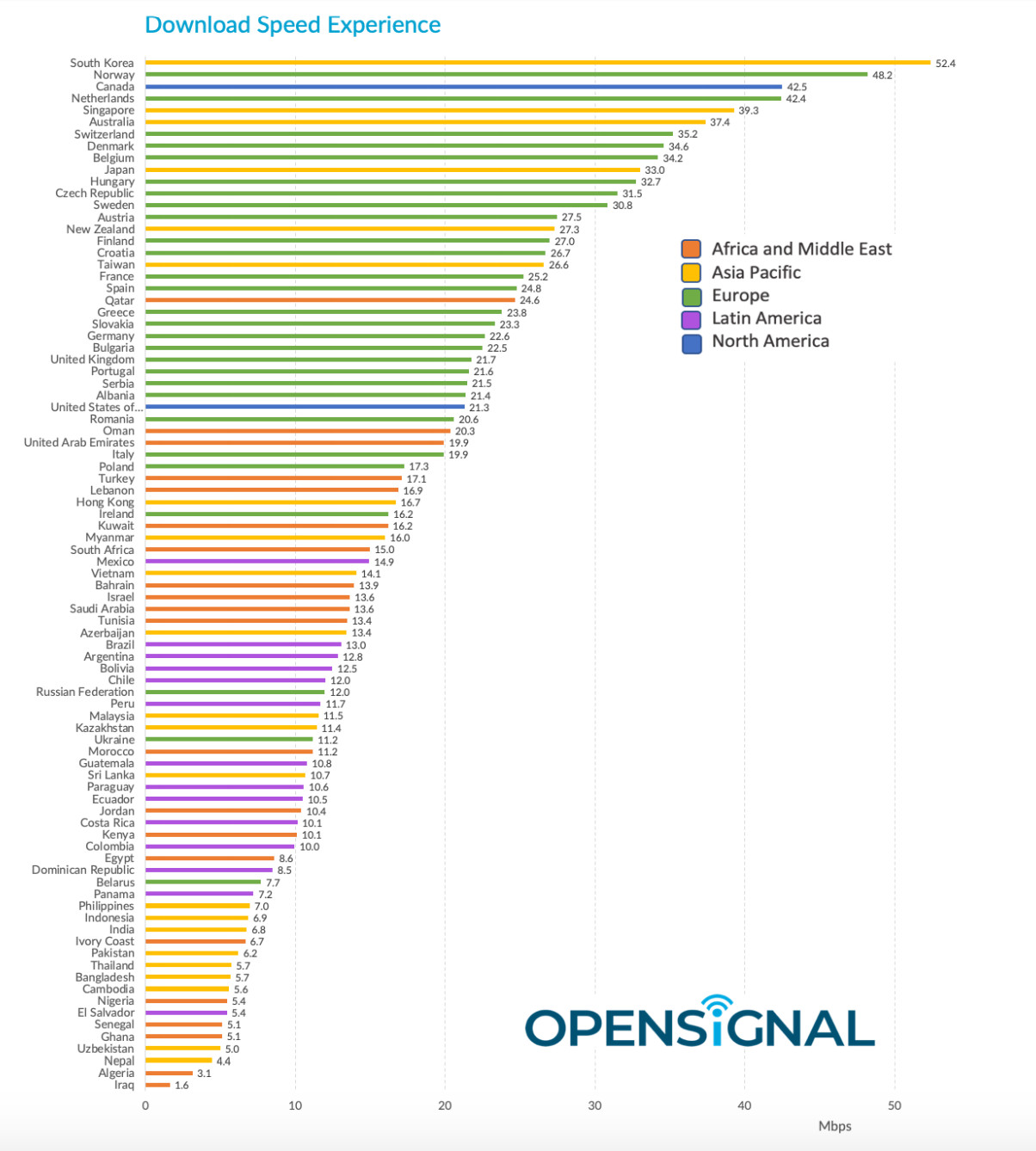 The biggest variation between Upload speed experience scores of our users was at the top end of the table, where the gap between leader Denmark and tenth-placed Canada was over 5 Mbps.

In only 13 of the 87 countries we rated our users averaged Latency experience scores under 40 milliseconds, while none scored under 30ms. One continent dominated our Latency Experience analysis, with six European countries in our top 10.5G’s designers target much improved latency as one of their goals.

At the other end of the scale we inevitably have developing countries, but it’s surprising to see India still lagging at 6.8 Mbps average despite all the investment from Reliance Jio, which has been focused on coverage rather than speed.   India is doing a lot better in terms of 4G availability. The average Indian mobile user has access to 4G about 91% of the time according to OpenSignal.

Only four European countries made OpenSignal’s 4G Availability top 10 — the fewest of any of our award metrics. And both the U.S. and India made the top 10, despite being distinctly mid-table in all other key metrics.  One of the standout countries to feature in the top five of our 4G Availability rankings was the U.S. which was distinctly mid-table across all other key award metrics but managed a fifth-place finish in 4G Availability. In our most recent Mobile Network Experience USA report, we saw Verizon overtake T-Mobile following a fierce battle in this metric. This rivalry has driven up 4G Availability in the country, leading to a world-class position for the U.S. in our rankings. 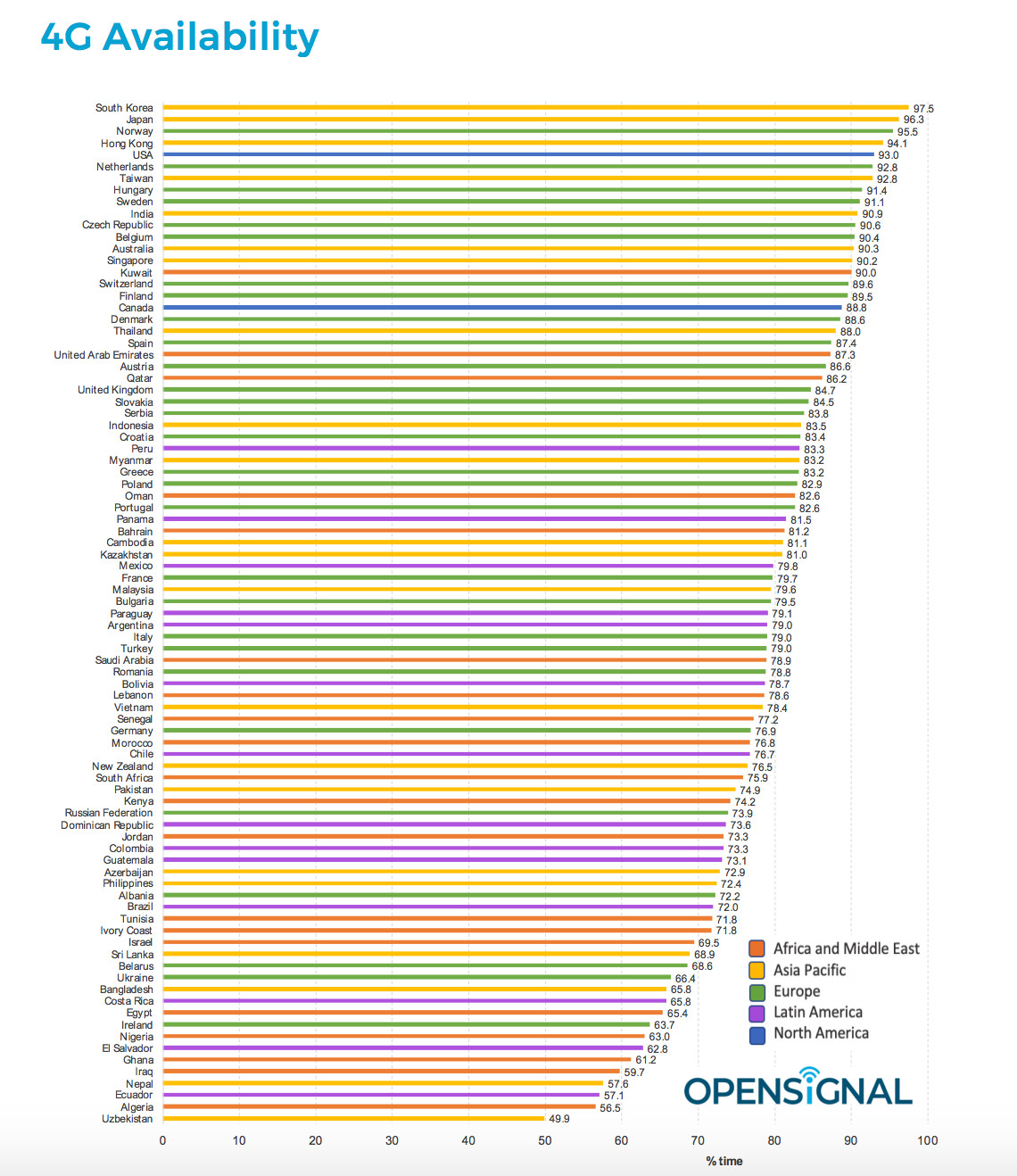 Indeed, 4G is becoming more and more ubiquitous, even in developing markets. OpenSignal’s analysis shows that the average 4G Availability
across the 87 countries experienced by our users is close to 80%, with 15 markets scoring over the 90% mark. The top ends of our tables were
largely dominated by European countries, but no one country appeared in the top 10 for all five of our key metrics. European countries, however,
dominated, racking up far more top 10 entries than any other region.

In a ranking of the 10 countries who scored highly across all five key metrics, only two were from outside Europe. 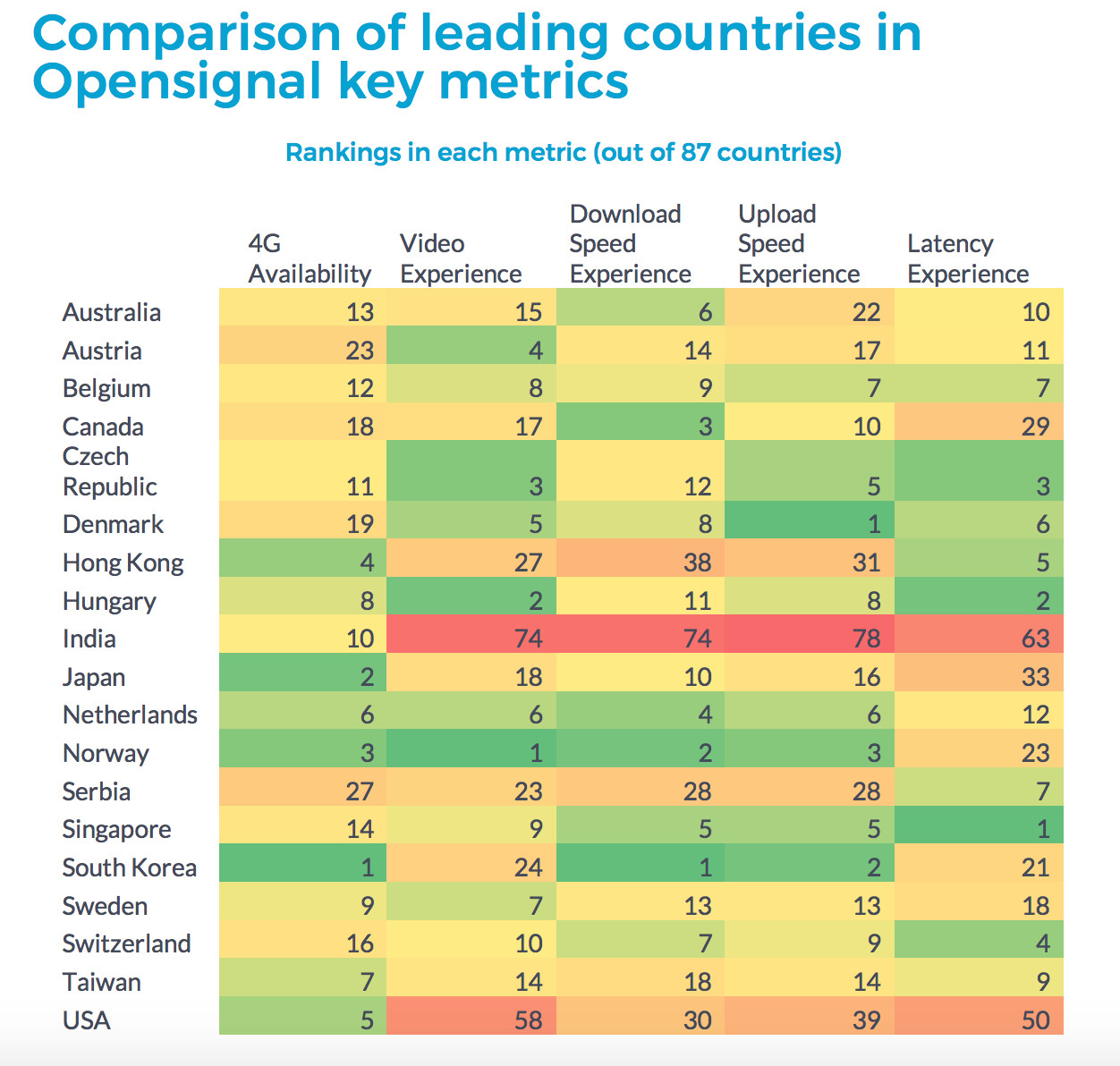 Norway was #1 in the Video Experience category despite of being even worse than Korea when comes to latency.  Hungary was #2.  Astonishingly,  only six non European countries among the top 25 who all scored a Very Good rating (65-75 out of 100).

5G should mean more consumers will be able to enjoy a good mobile Video Experience more often because of the increased mobile capacity new high frequency 5G spectrum will provide to mobile operators.

You can download the complete OpenSignal (free) report here.

According to a new report by OpenSignal, cellular network speeds have gotten faster and often greater than average Wi-Fi speeds.  In 33 countries, smartphone users now experience faster average download speeds using a mobile (cellular) network than using Wi-Fi.  The upshot is that cellular networks (some type of LTE) are no longer inferior to Wi-Fi in every country and the mobile industry must change a number of design decisions as a result.

In sharp contrast to the above, U.S. Wi-Fi is still 25Mbps faster than mobile networks on average.  Same is true for Hong Kong, South Korea, and Singapore.

In China by contrast, average Wi-Fi speeds were recorded at 23.9Mbps, compared to overall mobile download speeds of 13.8Mbps.

OpenSignal states that telecom operators in markets where there is little difference between mobile and Wi-Fi speeds are using fixed wireless networks effectively to support their cellular networks.  They also experience greater mobile network consumption as consumers in the market have little incentive to switch networks. With 5G coming in various flavors, cellular networking speeds are bound to get faster and better. However the next generation of Wi-Fi – IEEE 802.11ax or Wi-Fi 6 is designed for cellular data offloading to a fixed broadband wireless network.  Hence, both technologies are meant to be complementary.

Another interesting observation from the study is a mobile device’s tendency to favor Wi-Fi over cellular, even if the Wi-Fi connection is not as good (that’s my experience with a Samsung smart phone). With the exception of smart phones made by Huawei, most cellular devices will automatically switch from cellular networks to Wi-Fi without performing a speed test. Huawei phones will switch from a slow Wi-Fi link to a faster cellular connection where appropriate.  We think the entire mobile phone industry should do this type of speed test and wireless network switching in both directions (Wi-Fi to cellular and cellular to Wi-Fi).