Cogent Communications, one of the world’s largest ISPs, is carrying more traffic on its network than most incumbent telcos. During its most recent earnings report, Cogent said its quarterly traffic growth came in at 10%, while year-over-year traffic growth hit 44%.   Let’s break that down into on-net and off-net services/customers:

Cogent classifies all of their customers into two types:  NetCentric customers and Corporate customers.

The size and scale of our network continues to grow. We have over 927 million square feet of multi-tenant office space on-net in North America. Our network consists of over 31,900 metro fiber miles and over 57,400 intercity route miles of fiber.

Cogent remains the most interconnected network in world, where we are directly connected with over 6,360 networks. Less than 30 of these networks are settlement-free peers. The remaining over 6,330 networks are paying Cogent transit customers.

We operate 52 Cogent-controlled data centers with 587,000 square feet of space and we are operating those facilities at 32% utilization. Our sales force turnover rate in the quarter was 4.8% per month, again better than our long-term average turnover rate of 5.7% per month. And I think a testament to the training and retention programs that we’ve put in place. We ended the quarter with 438 reps selling our services.

Cogent remains the low cost provider of internet access and transit services. Our value proposition to our customers remains unparalleled in the industry. Our business remains entirely focused on the Internet and IP connectivity and data colocation services. Our services provide a necessary utility to our customers. Beginning at the start of Q2 and April 1st, we began selling our SD-WAN services. We do not expect a material contribution from these services for the next several quarters.

We expect our annualized constant currency long-term revenue growth to be consistent with our annualized guidance of 10% to 20%, and our long-term EBITDA margin expansion rates to remain approximately 200 basis points per year for the next several years.

We expect to grow the sales force at between 7% and 10% per year for the next several years, while we expect operational head count growth to be slower at probably 2% to 3%. So the mix will increasingly become more sales-centric. Because of the efficiencies in running our business and the standardization of our products and the systems that we’ve deployed, we can sustain 44% traffic growth, 20% growth in unit number of connections and do that with a increase in operational and overhead employees of only about 2% to 3% per year. The sales force, however, is the engine that will drive accelerating revenue growth. And investing in that sales force has been and continues to be our major focus.

“We divide the network into four big technology regions — edge routing, core routing, metro transport and long-haul transport,” Schaeffer told Light Reading. “In all of those functional areas we are on our third generation of equipment — we’ve done two complete forklift upgrades in 19 years — and, you know, I’m sure we’ll go to a fourth generation soon,” he added.

The KeyBanc Capital Markets 20th Annual Global Technology Leadership Forum was held at the Sonnenalp in Vail, CO. Dave Schaeffer will be presenting on Monday, August 13th at 10:00 a.m. MT.  Investors and other interested parties may access the live webcast of the presentation by visiting the webcast page.

The Oppenheimer 21st Annual Technology, Internet & Communications Conference was held at the Four Seasons Hotel in Boston, MA. Dave Schaeffer will be presenting on Wednesday, August 8th at 1:05 p.m. ET.  Investors and other interested parties may access the live webcast of the presentation by visiting the webcast page.

The Cowen 4th Annual Communications Infrastructure Summit was held at the St. Julien Hotel and Spa in Boulder, CO. Dave Schaeffer will be presenting on Tuesday, August 7th at 3:30 p.m. MT.  Investors and other interested parties may access the live webcast of the presentation by visiting the webcast page. 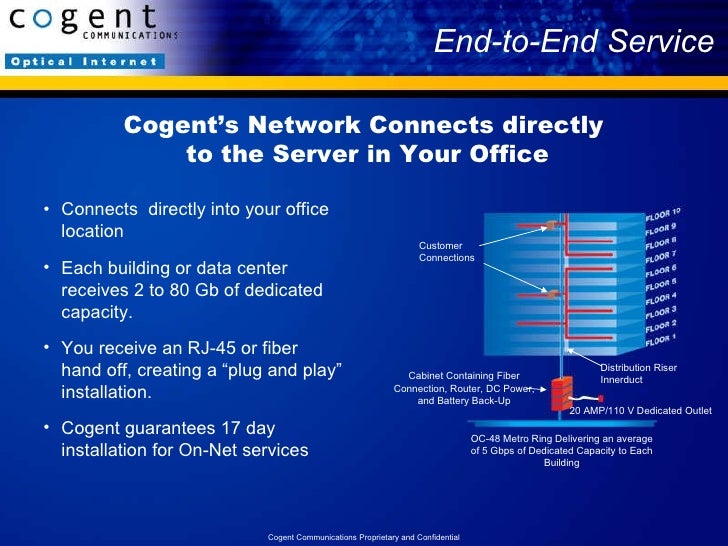