The Justice Department approved T-Mobile US Inc. ’s merger with Sprint Corp. after the companies agreed to create a new wireless carrier by selling assets to satellite-TV provider Dish Network Corp.  The federal approval for T-Mobile and Sprint caps a more than yearlong review of a combination that fell apart twice in the past five years over terms of the deal or fears that the Justice Department would object.

The landmark antitrust agreement seeks to address concerns that the combination of T-Mobile, the nation’s No. 3 carrier by subscribers, and No. 4 Sprint will drive up prices for consumers. It would leave more than 95% of American cellphone customers with the top three U.S. operators.

A deal brokered by the Justice Department will require Dish, which has been sitting on valuable airwaves, to build a 5G network for cellphone customers. To help it get started, T-Mobile will sell Sprint’s prepaid brands to Dish and give access to its network for seven years.

“The remedies set up Dish as a disruptive force in wireless” with the pieces needed for the company to have a cellphone service that is ready to go, Makan Delrahim, the Justice Department’s antitrust chief, said in a news conference.

Critics of the arrangement include a group of state attorneys general that broke with the Justice Department and have filed an antitrust lawsuit seeking to block the more than $26 billion merger. Five states that weren’t part of the lawsuit joined the federal government in the settlement announced Friday.

“Why scramble so much to create a fourth competitor when you already have one?” said Samuel Weinstein, an assistant law professor at the Cardozo School of Law at Yeshiva University who worked previously in the Justice Department’s antitrust unit.

The deal gives Dish Network, a satellite-TV provider, about nine million Sprint prepaid cellphone customers and additional wireless spectrum. Those subscribers, which mostly come from its Boost Mobile business, represent about one-fifth of Sprint’s customer base. Dish’s service, which could keep the Boost brand or take on a new name, would also be able to move from pay-as-you-go plans to postpaid service, which tends to be more profitable.

T-Mobile and Sprint must also give Dish access to at least 20,000 cell sites and hundreds of retail locations. The new T-Mobile must provide “robust access” to its network, the Justice Department said.  Please see comments on Dish in the box below this article.

The union of T-Mobile and Sprint, years in the making, would create a wireless company surpassing 90 million U.S. customers, closing the gap with Verizon Communications Inc. and AT&T Inc., which each have roughly 100 million wireless customers. It also would fulfill a long-held goal of Japan’s SoftBank Group Corp., which owns most of Sprint, and Deutsche Telekom AG, which controls T-Mobile. 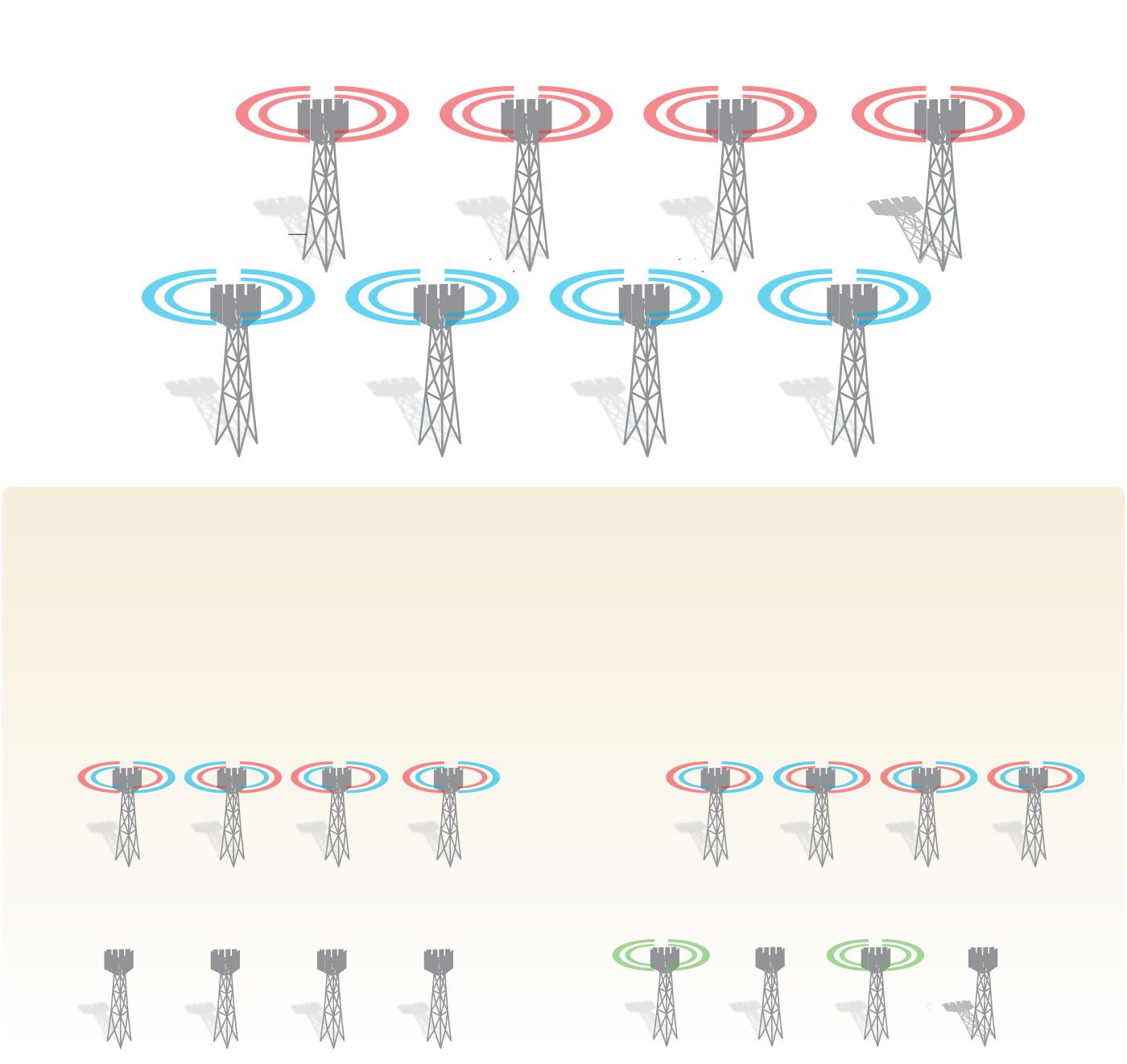 In its agreement with the government, T-Mobile promised not to raise prices for three years and cover 97% of the U.S. population with 5G service in three years.   T-Mobile has been adding millions of customers at the expense of its rivals, pushing unlimited data plans and lower prices than the incumbents. Sprint, despite owning valuable airwaves, has been shedding millions of subscribers and has struggled to be profitable.

T-Mobile surpassed Sprint to become the number three wireless carrier by subscribers and argued the acquisition of the smaller carrier’s airwaves would help speed its deployment of a 5G network so that it could better compete with Verizon and AT&T.  U.S. carriers have been battling for customers in the $180 billion wireless voice-and-data market, where growth has slowed now that the companies have rolled out unlimited data plans and most Americans have upgraded to smartphones.

Dish, which generated $13.6 billion in annual revenue last year, had about $13 billion of net debt before the deal. It will need to spend billions of dollars in the coming years to absorb the wireless carriers’ castoff assets, build its own network and vie for customers.
Dish will scrap its NB-IoT plan and focus purely on 5G, which the U.S. government has always wanted, according to a person familiar with the matter. (Dish hasn’t totally abandoned its old plan yet because the deal still hasn’t closed).  Dish must build a 5G network that covers 20% of the U.S. population by 2022 and 70% by 2023. If it can’t reach that goal, Dish will have to pay a $2.2 billion penalty to the U.S. Treasury.
Merger Being Challenged:
A group of states led by the attorneys general of New York and California are pressing ahead with an antitrust lawsuit seeking to block the combination, saying it would harm consumers. All the officials who joined the suit are Democrats; those who decided to support the Justice Department on Friday are Republicans.

Letitia James, the New York attorney general, said the proposed merger would cause harm to consumers nationwide. “To be clear: The free market should be picking winners and losers, not the government, and not regulators,” she said during a call with reporters. Ms. James said Dish lacks the experience to operate a nationwide mobile network.

Mr. Delrahim said his office will share its settlement with the federal judge overseeing the states’ lawsuit. “Sometimes independent sovereigns do make independent determinations,” he said. A trial is expected later this year. On Friday, T-Mobile and Sprint extended the deadline to close their deal, from July 29 to Nov. 1.

The Justice Department stopped sharing information with the Democratic attorneys general after they decided to file their lawsuit in June without notifying their federal counterparts, Mr. Delrahim said. “That was their choice, not ours,” he said.

T-Mobile said it expects to close its Sprint purchase in the second half of this year despite the states’ lawsuit.  Under the deal, Dish will pay $1.4 billion for the Sprint customer accounts, most of which come from its Boost prepaid brand, and $3.6 billion three years later to buy Sprint spectrum licenses in the 800-megahertz range, which can travel long distances and cover rural areas.

The new T-Mobile will have the option to lease back part of that spectrum for an additional two years after the airwaves sale closes. The companies have also agreed to negotiate for T-Mobile to lease Dish spectrum in the 600-megahertz range.

Dish is set to start its wireless life with a base of Sprint’s pay-as-you-go customers, though carriers often struggle to keep those so-called prepaid subscribers. More than 4% of Sprint’s prepaid customers choose to drop their service or are disconnected for nonpayment each month, according to company filings.

The deal creates a fake competitor, said Andrew Jay Schwartzman, a lecturer at Georgetown Law, adding that even if Dish builds out its own network it will take years. During that time, the three large carriers will be able to introduce 5G and lock in their subscriber bases, he said.

Sprint ended March with nearly $33 billion of net debt on its balance sheet. Even though it had more than 40 million customers, Sprint said during deal negotiations that it was in poor health and wouldn’t be able to launch nationwide 5G service without the merger.

Dish has argued it can build a better network by starting from scratch. Even before he pursued a deal with the Justice Department, Dish Chairman Charlie Ergen said his business could invest capital more efficiently without the burden of old equipment and software holding back its ambitions. Dish hasn’t made public the prices or structure of the wireless plans it will sell.

“These developments are the fulfillment of more than two decades’ worth of work and more than $21 billion in spectrum investments intended to transform Dish into a connectivity company,” Dish CEO Ergen said in a press release. “Taken together, these opportunities will set the stage for our entry as the nation’s fourth facilities-based wireless competitor and accelerate our work to launch the country’s first standalone 5G broadband network.”

Senior FCC officials said on a call with reporters that they are confident the new carrier under Dish will be viable because the wholesale deal it has struck with the new T-Mobile is more aggressive than any other such arrangement the carrier and Sprint currently have. Its terms give Dish the financial ability to compete in the prepaid market against T-Mobile’s Metro brand, they said.   The settlement also included provisions designed to make sure Dish actually builds the promised infrastructure. Among other penalties, Dish agreed to pay the government up to $2.2 billion if it fails to meet its network expansion requirements.

Following the closing of T-Mobile’s merger with Sprint and subsequent integration into the New T-Mobile, DISH will have the option to take on leases for certain cell sites and retail locations that are decommissioned by the New T-Mobile for five years following the closing of the divestiture transaction, subject to any assignment restrictions. The companies have also committed to engage in good faith negotiations regarding the leasing of some or all of DISH’s 600 MHz spectrum to T-Mobile.

The completion of the T-Mobile and Sprint combination remains subject to remaining regulatory approvals and certain other customary closing conditions. T-Mobile and Sprint expect to receive final federal regulatory approval in Q3 2019 and currently anticipate that the merger will be permitted to close in the second half of 2019. Additional information can be found at www.NewTMobile.com.

The Justice Dept has rescued Dish Chairman Charlie Ergen from his bet of buying wireless spectrum but keeping it idle. Mr. Ergen loudly opposed the merger, and his reward was the chance to buy Sprint’s pre-paid customers at a bargain price and have access to 20,000 T-Mobile-Sprint cell sites and hundreds of retail locations. But Dish has no experience running a wireless network, and it will take years to build one even as the Big Three invest to gain an edge in 5G wireless…………………………………………………..

A  strong third competitor will be good for consumers and 5G deployment in the U.S. The combined company should force Verizon and AT&T to focus on 5G rather than dabbling in content acquisitions like Time Warner. Three strong competitors are better than two.

“That’s a real significant win for U.S. leadership in 5G. It’s been my top priority. It’s been a big priority for the Trump administration. And by accelerating 5G build-out through this deal, 99% of Americans are going to see 5G faster,” FCC Commissioner Carr said.

In addition to the Justice Department, FCC Chairman Ajit Pai announced support for the more than $26 billion merger in May. The deal still faces a lawsuit from 13 state attorneys general and the District of Columbia that seeks to block it.