The development of 5G happens through a global forum called the 3rd Generation Partnership Project (3GPP). It’s a partnership between seven global Standards Development Organizations (SDOs) of which Telecommunications Standards Development Society, India (TSDSI) is a member. 3GPP kickstarted the 5G project in 2016 where we made substantial contributions to three successive releases of 5G specifications to date. IITH primarily led the efforts with significant support from CEWiT, IITM, and other Indian corporations (Tejas Networks and Reliance Jio are our major industry partners) with well over 300 technical documents submitted to date.

These sustained efforts led to the incorporation of several innovations introduced into the global 5G standards. One significant contribution that stands out is the introduction of a new transmit waveform, the only new waveform that is adopted in 5G, which is a generational change.

Both 4G and 5G adopted a waveform technology called OFDM (Orthogonal Frequency Division Multiplexing) that is quite suitable for the downlink transmission (that is the link between a base station (BS) and user equipment (UE)) but not so well suitable for the reverse link (that is the link between UE and BS). The limitations of OFDM owes to low-power efficiency (of about 10%). Prof Kuchi has designed a new waveform called “pi/2 BPSK with spectrum shaping” that provides close to 100% power efficiency and yet retains all the other advantages offered by OFDM.

This new transmit waveform allows the power amplifier in the UE to operate near its saturation level thus delivering a 3-4fold increase in the transmission power, and a hardware cost similar to that of OFDM. The overall gain in the cell range compared to OFDM will be at least twofold, hence this became a driver behind the design of the large cell 5G concept.

This indigenous waveform technology is developed for over a decade and is covered by a family of patents developed by IITH and CEWiT. There are well over 100 patents filed by IITH and WiSig to date. These patents will likely become the backbone of our indigenous 5G ecosystem. India’s 5G at ITU There are two parallel tracks that India took during the 5G development. The first effort is the aforementioned contributions to the 3GPP-based 5G standard, and our second noteworthy contribution is through TSDSI and the ITU (International Telecommunication Union). The second effort is led by IITM on the ITU front with significant backing and support from IITH, CEWiT (and Indian Industry such as Tejas networks, Reliance Jio).

ITU is a United Nations body that specifies requirements and radio standards for 5G known generically as IMT 2020. ITU-R WP5D had adopted India’s proposed Low-Mobility-Large-Cell (LMLC) use case as a mandatory 5G requirement in 2017. This requirement was adopted by ITU-R WP5D mainly as a result of sustained effort by the Indian entities through the Department of Telecommunications (DoT) to address the unique Indian rural broadband deployment scenario. Several countries supported this use case as they saw a similar need in their jurisdictions as well. TSDSI took this opportunity to develop the so-called LMLC based 5G technology that is a modification of 3GPP-based 5G specification.

This indigenously developed standard designated as 5Gi will deliver ultra-fast, low-latency mobile internet and next-generation IoT services in both cellular and mm-wave spectral bands that are common to all 5G candidate standards and adds “pi/2 BPSK with spectrum shaping waveform” as a mandatory technological enhancement that can provide broadband connectivity to rural users using ultra-long range cell sites.

This enhancement will ensure that 100% of India’s villages are covered from towers located at panchayat villages, whereas nearly a third of such villages would be out of coverage otherwise. Both 5G and 5Gi are fully compatible and interoperable systems that are being leveraged for the upcoming deployments in India. Adoption of the LMLC based 5G standards in India will enable India to leap forward in the 5G space, with key innovations introduced by Indian entities accepted as part of global wireless standards for the first time. The nation stands to gain enormously both in achieving the required 5G penetration in rural and urban areas as well as in nurturing the nascent Indian R&D ecosystem to make a global impact. The current national efforts are aligned with the national digital communication policy that promotes innovation, equipment design, and manufacturing out of India for the world market.

MeitY has been funding our wireless research for the past 10 years and these efforts have led to the development of larger wireless programs. More recently, the DoT (India Dept of Telecom) has sanctioned the “Indigenous 5G Testbed” program with a project outlay of 224 crores to IITH, IITM, CEWiT, IITK, IITB, IISc, and SAMEER.

This 3-year program, already close to completion, started yielding results in the form of prototype base stations, CPE/UE and NB-IoT chipsets. IITH stands out with major contributions to key 5G technologies such as cloud RAN base station with massive MIMO capability and cellular NB-IoT chipset for connecting sensors and meters to the internet. We are gearing towards full-fledged demonstration and field trials.

An upcoming player in the 5G space WiSig Networks (WiSig) is a 5G start-up incubated at the IITH tech incubator (i-tic foundation). WiSig has developed a 5G radio access network (5G-RAN) based on an emerging technology called O-RAN (Open-Radio-Access Network), that is being touted as the next major disruptor in the 5G landscape. This technology allows rapid deployment of low-cost, software upgradable 5G base stations in significantly higher volumes and larger densities than the current 4G network.

O-RAN is a disaggregated 4G/5G base station based on open interfaces and general purpose hardware. It is being defined by the O-RAN alliance, TIP Open RAN project and ONF SD-RAN v1.0 Software Platform for Open RAN.

Some operators have initiated the deployment of O-RAN based software-defined network and virtualization networks that enable self-organization, low operational cost and ease of introduction of new features and service upgrades. New 5G use cases can be introduced rapidly on the fly using software upgrades as opposed to costly and time-consuming hardware development cycles. WiSig has created commercial grade IP in this space and is well on track to carry out one of India’s first O-RAN compliant demonstrations of a software defined 5G massive MIMO base station.  Overall, WiSig is well on its path to deliver 5G RAN intellectual property components to the global 5G supply chain. 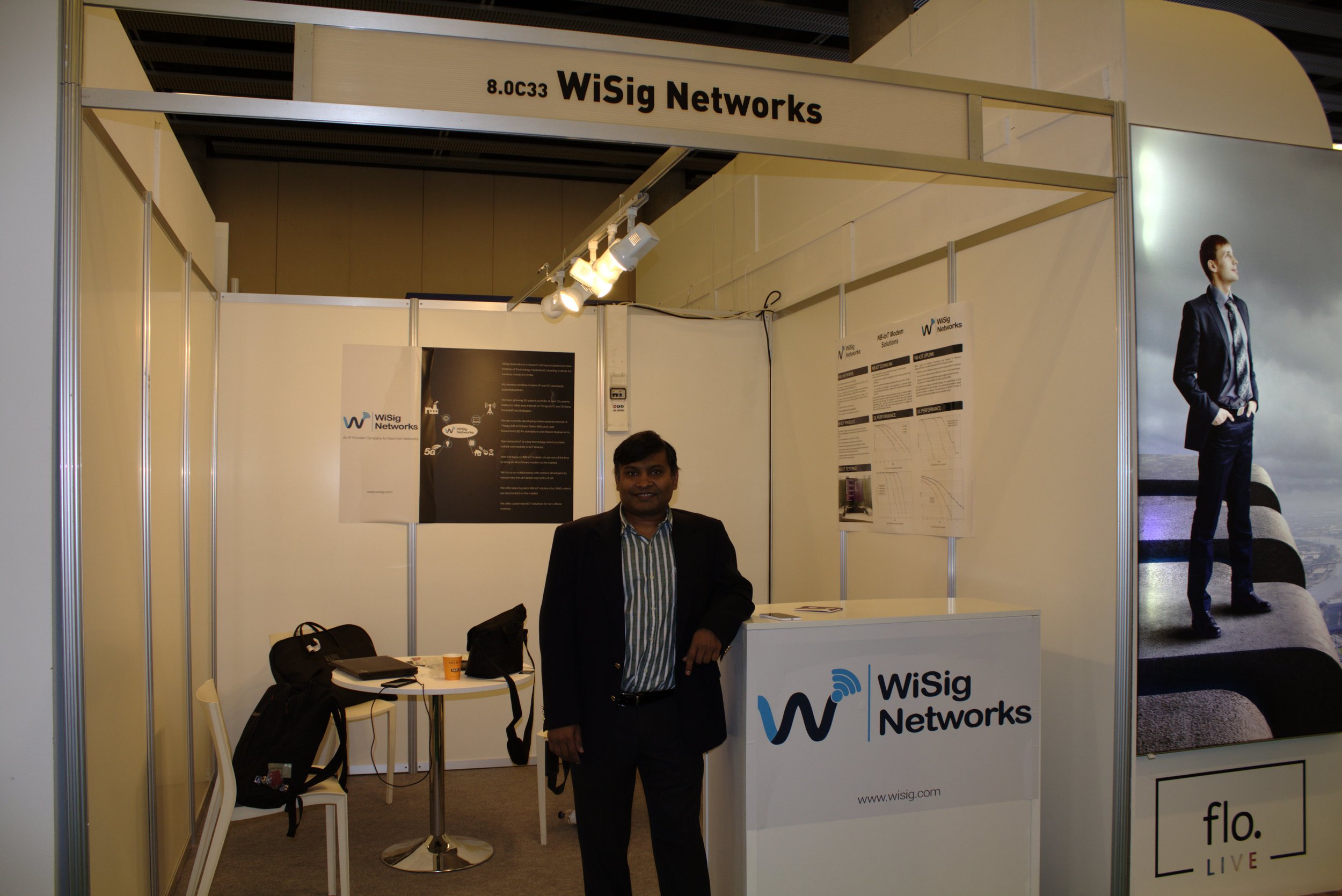 In contrast to high-speed mobile broadband, a vast number of IoT applications requires few bits to be exchanged with the internet intermittently. The key considerations of these kind of IoT devices are that they are ultra-low-cost and have a long battery life – up to 10 years. Narrowband IoT (NB-IoT) (Belongs to the 5G family of technologies is well suited for this purpose and is quietly emerging as a killer application for lowbit rate IoT applications. IITH and WiSig joined hands in commercializing a NB-IoT SoC (System on a Chip) that was successfully taped out in Q1 2021.

The chip is named “Koala” after an animal indigenous to Australia that sleeps about 20 hours a day – typical behavior of the NB-IoT modem.

Given that this is the first time a standards compliant cellular modem is designed in India and that both the software and hardware that goes into the chip is developed indigenously, this chip should preferably be leveraged to serve the security needs of critical national IoT infrastructure.

In summary, the investments made by Meity and DoT on 5G research have started to bear fruit in delivering the basic technological components and sub-systems required to build 5G. The time is ripe for the Government to nurture domestic design and manufacturing of 5G equipment. The country has enough talent and the technological depth required to support a domestic 5G ecosystem. With the right kind of policy support, then India is likely to see a 5G/IoT domestic manufacturing revolution within this decade. IITH will continue to play a pivotal role in shaping the 5G ecosystem not only in India but globally as well.

Kiran is a Professor Department of Electrical Engineering IIT-Hyderabad (IITH) and Dean of Research. He also started WiSig Networks that has been incubated at IITH. He received PhD and MS degrees in Electrical Engineering from the University of Texas at Arlington, TX.  His current projects include: Cloud radio, Heterogeneous networks (HeNets), Next generation wireless test-bed development.