In a report released Thursday, the U.S. Government Accountability Office (GAO) said that the FCC’s benchmark for minimum broadband internet speeds (set six years ago at “always on” access of 25 Mbps downstream and 3 Mbps upstream) is no longer fast enough. That’s  especially the case for small business owners. After conducting a study on the matter, the GAO recommends the FCC analyze small business speed requirements at this time and reconsider its current definition.

“FCC officials said they are not aware of any small business requirements that have been taken into consideration in determining the minimum speed benchmark,” the GAO says. “Analyzing small business speed requirements could help inform FCC’s determination of the benchmark speed for broadband.” 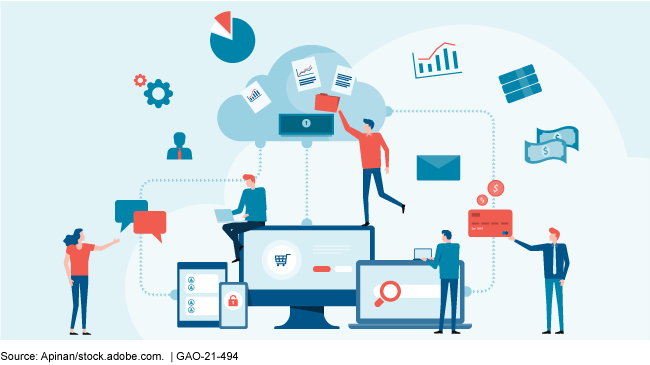 The figure below illustrates the various kinds of business broadband use and the associated relative speed requirements.

Illustrative Examples of Different Kinds of U.S. Business Broadband Use:

Sources vary in terms of the specific speeds they recommend for small businesses. For example, in 2017, BroadbandUSA—a National Telecommunications and Information Administration program—published a fact sheet stating that small businesses need a minimum of 50 Mbps speeds in order to conduct tasks such as managing inventory, operating point-of-sale terminals, and coordinating shipping. A 2019 USDA report on rural broadband and agriculture stated that, as technology advances and volumes of data needed to manage agriculture production grow, speeds in excess of 25/3 Mbps with more equal download and upload speeds will likely be necessary.

Reports from small businesses show that many want a download speed of at least 100 Mbps to run their operations more effectively. According to the FCC’s data, about 67 percent of rural Americans have access to 100 Mbps down/10 Mbps up speeds, compared to about 83 percent with access to the agency’s current minimum benchmark.

To fulfill a statutory requirement to determine annually whether advanced telecommunications capability is being deployed on a reasonable and timely basis to all Americans, FCC sets a minimum broadband speed benchmark.

In its 2021 Broadband Deployment Report, FCC stated that the current benchmark, last set in 2015, continues to meet that requirement. However, FCC officials said they are not aware of any small business requirements that have been taken into consideration in determining the minimum speed benchmark. Analyzing small business speed requirements could help inform FCC’s determination of the benchmark speed for broadband.

GAO is making one recommendation to FCC to solicit stakeholder input and analyze small business broadband speed needs and incorporate the results of this analysis into the benchmark for broadband. FCC agreed with this recommendation.