Each cable system will contain 16 fiber optic pairs while adhering to the innovative concepts of open cable, supporting multiple fiber tenants, and open landing station, enabling competitive access to the cable termination points, the two systems set a new reference in terms of diversification, scalability and latency throughout these geographies.

Blue will be deployed along a new northbound route in the Mediterranean, crossing the Strait of Messina, rather than following the traditional route through Sicily Channel. 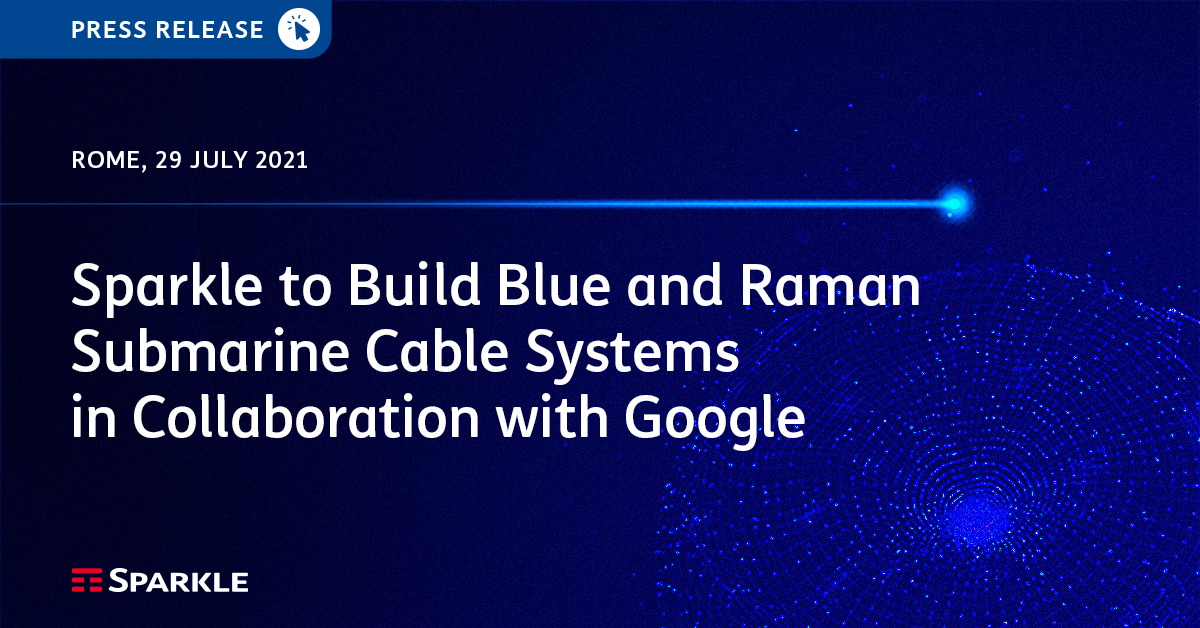 Within the Blue System, BlueMed submarine cable is now Sparkle’s own private domain sharing its wet components with four additional fibre pairs and an initial design capacity of more than 25 Tbps per fibre pair, and is extended up to Jordan (Aqaba) with additional private branches into France (Corsica), Greece (Chania – Crete), Italy (Golfo Aranci – Sardinia and Rome), Algeria, Tunisia, Libya, Turkey, Cyprus and more in the future.

In addition, Sparkle’s Genoa Open Landing Platform is set to become the alternative priority access for other upcoming submarine cables looking for a diversified entry to Europe, backhauled to the Milan’s rich digital marketplace, and thus a new reference gateway between Africa, the Middle East, Asia and Europe.

Blue and Raman are expected to be ready for service in 2024, with the Tyrrhenian part of BlueMed planned to be operational already in 2022.

“We are extremely proud to bring our collaboration with Google to the next level with this cutting-edge intercontinental infrastructure”, comments Elisabetta Romano, CEO of Sparkle. “With Blue and Raman Submarine Cable Systems, Sparkle boosts its capabilities in the strategic routes between Asia, Middle East and Europe and the enhanced BlueMed  strengthens our presence in the greater Mediterranean area”

With Blue and Raman, Google Cloud now has 18 investments in subsea cables around the world, including Google-funded cables like Curie, Dunant, Equiano, Firmina and Grace Hopper, and consortium cables like Echo, JGA, INDIGO and Havfrue.
You can learn more about Google Cloud’s network and infrastructure here.
For further information about Sparkle, email: [email protected]
References:
https://www.tisparkle.com/sparkle-blue-raman-submarine-cable-google
https://cloud.google.com/blog/products/infrastructure/announcing-the-blue-and-raman-subsea-cable-systems
https://www.telecomtv.com/content/access-evolution/sparkle-to-build-blue-and-raman-submarine-cable-systems-in-collaboration-with-google-42085/