Microsoft is the most innovative private network provider globally, according to enterprises already using a private LTE and 5G network, finds a new study from Omdia.

AT&T and Deutsche Telekom are also singled out as industry pace setters, according to Omdia’s latest Private LTE and 5G Networks research which surveyed enterprises globally. Two thirds of enterprises require private network suppliers to demonstrate integration with their existing cloud platform before they will buy. Similar demands apply to enterprises’ IoT and application management platforms.

“Enterprises have needs beyond connectivity when they buy a private network,” advises Omdia principal analyst for Private Networks Pablo Tomasi. “The top two reasons enterprises invest in private networks are better security and digital transformation. They need partners that can service those needs. Telcos may lose out if they don’t step up.”

Enterprises also want these results to be achieved promptly. 55% of enterprises expect a two-year return on their private network investment, but almost a fifth of those already deployed expect ROI in only a year.

Consumption preferences are changing fast: three quarters of enterprises now planning a private network prefer a hybrid model instead of the fully dedicated private networks that dominate 70% of deployments today.

The findings are from an annual survey conducted by Omdia on enterprises using, trialling, or planning to deploy private LTE and 5G networks in six key verticals, part of the Private Networks Intelligence Service. A total of 451 respondents from seven countries participated in the survey.

What is Private Wireless?

One of the challenges with the private wireless concept is that it is not a specific technology but rather more of a broad term encompassing a wide range of technologies. Marketing departments will have some wiggle room, as the meaning of private wireless varies significantly across the ecosystem.

Suppliers focused on mission-critical and public safety networks see private LTE and NR combined with a new spectrum as an opportunity to upgrade existing private narrowband communications equipment. With the number of LoRa end nodes surpassing 0.2 B, LoRa base station suppliers believe they are dominating the private wireless IoT market.

The operators are also positioning the concept differently, with some focusing on the benefits with broader coverage, while others are capitalizing on some of the new local concepts.

While definitions or interpretations vary widely on the part of both suppliers and operators, there appears to be a greater consensus among customers.

For end-users, private wireless typically means consistent, reliable, and secure connectivity, not accessible by the public, to foster efficiency improvements. For industrial sites, private wireless typically means low latency and high reliability. It is less about the underlying technology, spectrum, or business model and more about solving the connectivity challenge. In other words, end-users don’t care what is under the hood.

From a Dell’Oro perspective, we consider private wireless as nearly synonymous with 3GPP’s vision for NPNs. According to 3GPP, NPNs are intended for the sole use of a private entity, such as an enterprise. NPNs can be deployed in a variety of configurations, utilizing both virtual and physical elements located either close to or far away from the site. NPNs might be offered as a network slice of a Public Land Mobile Network (PLMN), be hosted by a PLMN, or be deployed as completely standalone networks.

There is no one-size-fits-all when it comes to private wireless. We are likely looking at hundreds of deployment options available when we consider all the possible RAN, Core, and MEC technology, architectures, business, and spectrum models.

At a high level, there are two main private wireless deployment configurations, Shared (between public and private) and Not Shared: 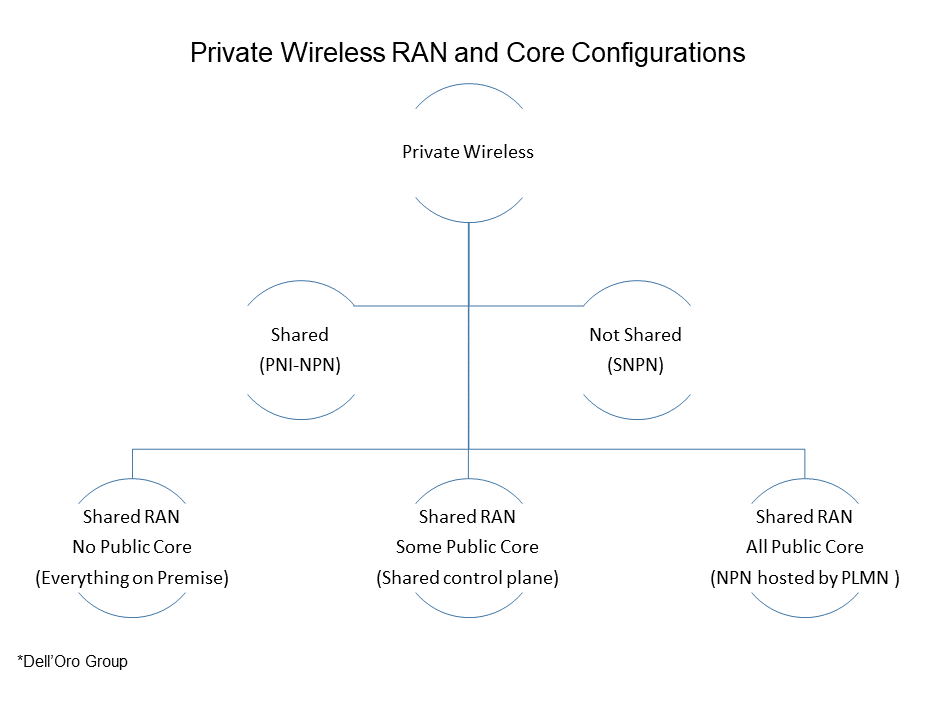 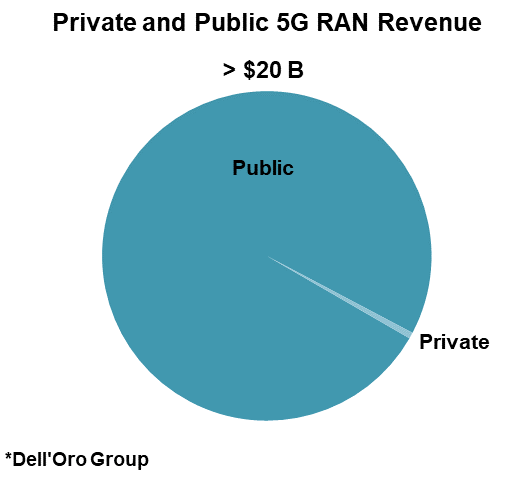 Meanwhile, private wireless activity using both macro and local base stations is rising:

One of the more compelling aspects with private wireless is that we are talking about new revenue streams, incremental to the existing telco capex. More importantly, the TAM is large, approaching $10–20 B when we include Non-Industrial, Industrial, and Public Safety driven applications.

At the same time, it is important to separate the TAM from the forecast. Here at the Dell’Oro Group, we continue to believe that it will take some time for enterprises to fully conceptualize the value of 5G relative to Wi-Fi. And as much as we want 5G to be as easy to deploy and manage as Wi-Fi, the reality is that we are not yet there. 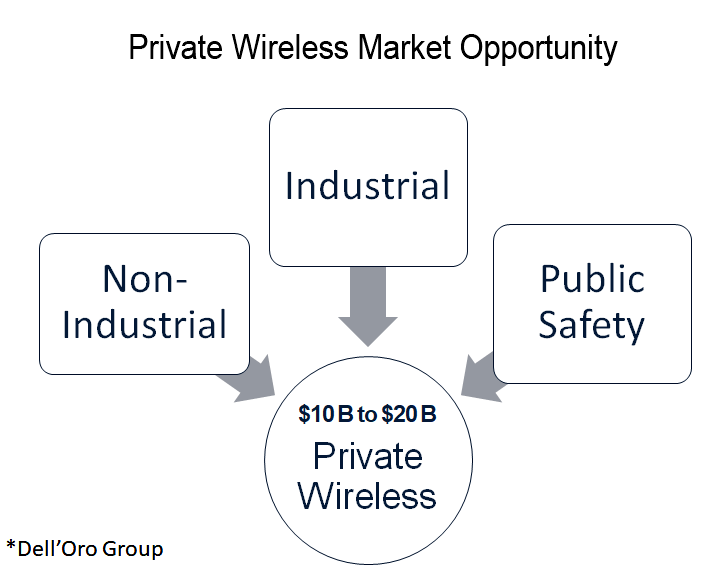 Still, the uptick in the activity adds confidence the industry is moving in the right direction. And although LTE is dominating the private wireless market today, private 5G NR revenues remain on track to surpass $1 B by 2025.