A new consortium in Arkansas is leading the way forward for electric cooperatives in the rural U.S. can increase bandwidth and save costs by collaborating on fiber broadband delivery.

Diamond State Networks (DSN) is a collective of 13 electric co-ops from across the state of Arkansas which are joining forces to deliver wholesale fiber broadband. All in, the cooperative networks’ 50,000 miles of fiber will cover 64% of Arkansas and reach 1.25 million rural Arkansans. The goal for DSN is to serve 600,000 residences and businesses in Arkansas in the next few years, with over 250,000 locations already deployed. Here’s a network coverage map: 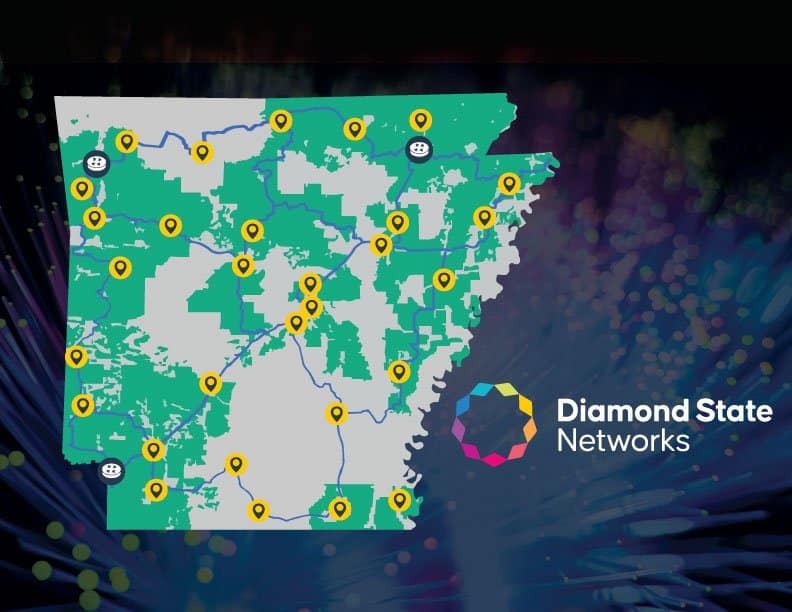 Doug Maglothin, DSN’s director of operations, says his company  expects to add “a couple more cooperatives” to that list. (The state of Arkansas has 17 electric co-ops, served by a central entity called the Arkansas Electric Cooperative Corporation.)

The collective of co-ops that form DSN are at different phases of their service delivery journey. Some, like Farmers Electric, are in the early planning stages. OzarksGo – the subsidiary of Ozarks Electric Cooperative – is furthest along and nearing 40,000 subscribers. Indeed, Maglothin referred to Ozarks Electric CEO Mitchell Johnson as the “visionary” for DSN, who saw the need for the state’s electric co-ops to get involved with broadband delivery in 2015 and 2016.

But as electric co-ops began entering the space in 2017 and 2018, “pretty quickly, you find out how difficult and expensive it can be to buy connectivity to the global Internet,” said Maglothin. It was “from that necessity” that the plan for DSN was born.

While the consolidated electric cooperative model is unique for the broadband space, other states and communities are deploying broadband as collectives or partners. That includes Utopia Fiber’s municipal, open access fiber delivery network in Utah as well as California’s planned open-access statewide middle-mile network. And this week, a group of rural telcos and an electric cooperative in Indiana announced plans to launch HoosierNet, a “multi-year, multi-million-dollar” statewide fiber network.

Maglothin said DSN is collaborating with other states looking for a similar solution and that Diamond State has “kind of become a beacon for cooperative middle mile,” as it offers a model that allows electric co-ops to control their costs.

“The more bandwidth you grow, the more content you collect, the more powerful your voice is in negotiating pricing to get to these big anchor points for your network,” said Maglothin. “So we feel like there’s a potential future for cooperative companies working together like this where we become one of the largest bandwidth aggregators probably in the country.”

The 13 member co-ops are investing more than $1.66 billion in fiber infrastructure for DSN. According to Maglothin, less than 20% of that funding is from federal and state grants. But he expects that DSN will be eligible for Broadband Equity, Access, and Deployment (BEAD) and Middle Mile grant funding, federal programs worth $42.45 billion and $1 billion, respectively.

According to Broadband.Money, a platform connecting local providers and networks with funding opportunities, Arkansas is estimated to receive $1.4 to $1.6 billion for broadband through the Infrastructure Investment and Jobs Act (IIJA). But those numbers are still to be determined by federal broadband mapping data that officials say will be released later this year.

Notably, while existing FCC broadband data is widely understood to undercount the digital divide in the US, a recent presentation by the Broadband Development Group at the Arkansas Rural Connect Broadband Forum revealed that the state’s broadband gap may now be smaller than the FCC’s count shows. While federal data puts Arkansas’ digital divide at 250,000 households or 21% of the population, BDG’s analysis brought that to 209,000 households (17%).

Maglothin attributes this increase in broadband access to the work electric co-ops have done in recent years. “It’s because of the rapid onset of cooperative fiber being pushed out,” he said.

For this reason, and with more funding coming down through the BEAD program, Maglothin thinks that Arkansas can go from being among the lowest-ranked states in the US for connectivity to the highest.

2 thoughts on “Diamond State Networks to invest more than $1.66 billion in fiber infrastructure in Arkansas”