Rakuten Mobile and Altiostar have announced a number of performance and scalability achievements for the Rakuten Mobile 4G and 5G Open RAN deployments in Japan.  That network, built on Altiostar’s cloud-native Open vRAN software, was said to achieve superior levels of automation and performance.

Rakuten Mobile launched its 4G network in April 2020. The wireless network operator ended January 2021 with more than 11,000 base stations that cover 74.9 percent of the population. Rakuten Mobile plans to expand its network coverage to 96 percent of Japan’s population coverage by summer this year.  That’s about five years ahead of its own schedule!  The network has achieved both high performance (number one in upload speed in market at 16.8Mbps, per OpenSignal), despite having only 1/6th of the spectrum holdings of competing operators in market.

In September 2020, five months after the initial launch, Rakuten Mobile launched a commercial-scale, cloud-native 5G network, using Altiostar’s Open vRAN service. As baseband functions are deployed as VNFs (virtual network functions), Rakuten Mobile automated various operational tasks such as new cell site integration (auto-commissioning), as well as fault detection and automated recovery from failures (self-healing). Due to the automation of its network, Rakuten Mobile reports it can provide a new 5G cell site in four minutes and a 4G site in eight minutes.

The 5G network, using advanced massive MIMO and millimeter wave (mmWave) radios, covers both sub-6 GHz and mmWave frequency bands. Altiostar worked with Qualcomm Technologies, Airspan, and Rakuten Mobile on innovation in mmWave radios based on Qualcomm 5G RAN platforms. Altiostar partnered with NEC and Rakuten Mobile to introduce to the 5G network the sub-6 GHz massive MIMO radios, which were validated as compliant with O-RAN specifications during an O-RAN Alliance Plugfest held this past September in India.

The 5G network has demonstrated impressive performance for end users, with throughput of 1.77 Gbps. This compares favorably to data from a Ookla, which detailed speed test results for Japan in Q3 2020, where the fastest 10% of users realized an average download speed of 719.42 Mbps.

“Rakuten has been a disruptor in the mobile space and our 4G and 5G Open vRAN deployments reflect this strategy,” said Tareq Amin, Representative Director, Executive Vice President and Chief Technology Officer at Rakuten Mobile. “The performance and stability of the 5G network shows that a cloud-native framework and web-scale architecture can compete with a traditional RAN approach and provide new levels of automation to the network. We will continue to drive the transformation of the mobile industry with a rich and diverse ecosystem with companies including Altiostar, Qualcomm Technologies and NEC.”

“Rakuten has been at the forefront of the Open vRAN movement since it began. The industry is closely watching its every step, and it has been able to demonstrate a high-quality experience for their customers,” said Stéphane Teral, Chief Analyst, LightCounting. “This is validated by the performance metrics of their 5G network and I am excited to see the next steps they take as the network goes national.”

“This is a significant milestone for the Rakuten Mobile and Altiostar partnership towards commercial realization of a high performing, cloud-native 5G RAN architecture,” said Ashraf Dahod, CEO of Altiostar. “The Altiostar container-based solution allows Rakuten Mobile to quickly provision new sites and turn up service for a customer in record time. By leveraging the power of an Open virtualized RAN, Rakuten can transform its network and its business to provide a robust service for the consumer that exceeds that of a traditional operator.”

Altiostar has partnered with Rakuten Mobile to design and deploy its Open vRAN. Rakuten Mobile has standardized on the Altiostar Open vRAN software for all types of deployment models from small cells to macro to massive MIMO, across 4G and 5G radio access technologies.

The company was selected by Dish last June to  deliver its cloud-native O-RAN compliant solution for DISH’s nationwide 5G network buildout, the first of its kind in the U.S. The Altiostar solution will provide openness, modularity, agility and scalability to DISH, enabling faster deployment of new 5G services for consumers and businesses.

About Rakuten MobileRakuten Mobile, Inc. is a Rakuten Group company responsible for mobile communications, including mobile network operator (MNO) and mobile virtual network operator (MVNO) businesses, as well as ICT and energy. Through continuous innovation and the deployment of advanced technology, Rakuten Mobile aims to redefine expectations in the mobile communications industry in order to provide appealing and convenient services that respond to diverse customer needs.

Qualcomm 5G RAN Platform is a product of Qualcomm Technologies, Inc. and/or its subsidiaries.

Qualcomm is a trademark or registered trademark of Qualcomm Incorporated.

Altiostar announced testing of massive MIMO 5G over a virtual Radio Access Network (vRAN) in collaboration with NEC and Rakuten Mobile. The tests aim to ensure interoperability of multi-vendor systems based on the open RAN specifications from the O-RAN alliance. 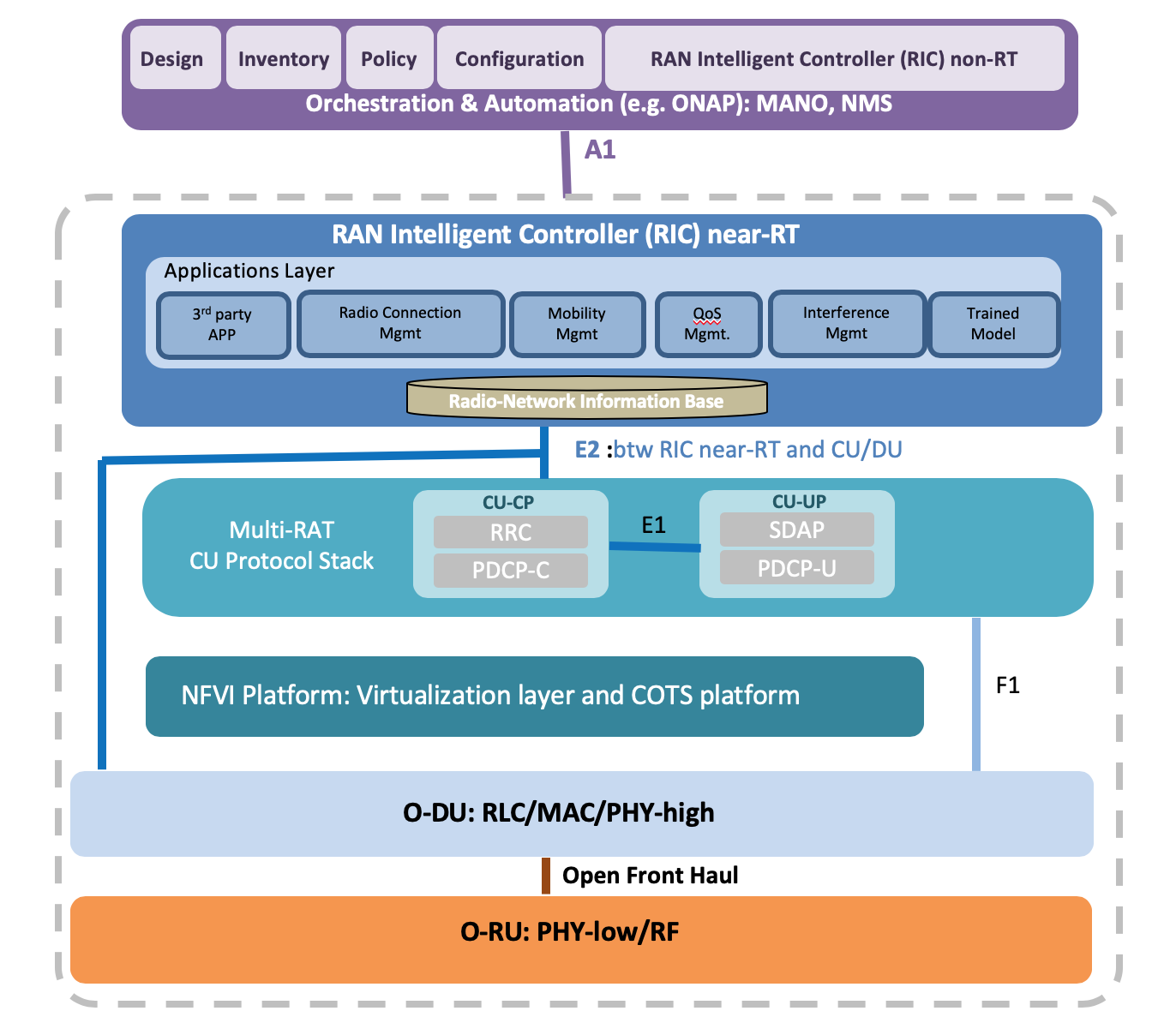 As part of management-plane integration, Altiostar is following a hierarchical model that allows the O-DU software to manage the NEC O-RU, including providing software upgrades, RU configuration, fault management and performance monitoring. This interoperability is being performed for 5G new radio (NR) sub-6 GHz massive MIMO O-RU and meets all the 3GPP downlink/uplink (DL/UL) requirements.

Altiostar says they have “pioneered RAN disaggregation since 2013 when it first introduced a split between the higher non-real-time layers of the protocol stack and the lower layers of the stack.  The industry then standardized this concept in the 3GPP and what is now known as the option-2 split between the centralized unit and the distributed unit. This paved the way for operators to think differently when it comes to disaggregation and network deployment,” according to Altiostar.

Further disaggregation was introduced by Altiostar in the form of a radio interface unit. The RIU incorporates lower L1 functionality and provides a gateway function that converts Common Public Radio Interface to/from Ethernet.  By eliminating the high bandwidth and proprietary CPRI interface to the radio, Altiostar took a key step towards integrating legacy Remote Radio Head over an Ethernet transport network to O-DU functionality.

Using this technology, the first multi-vendor RAN was deployed at a commercial scale and paved the way for operators to engage radio vendors to build O-RAN compliant radios. Rakuten Mobile’s adoption of the platform has helped move forward the ecosystem and open interfaces in the industry.

“Open RAN as a concept is one that the whole industry is now actively pursuing as a means to introduce supply chain diversity into mobile networks globally,” said Ashraf Dahod, CEO of Altiostar Networks. “Altiostar is leading the industry with this network transformation by ensuring interoperability, integration and most importantly extensive testing to ensure that we have a commercial, carrier-grade solution for both 4G and 5G while keeping the principles of Open RAN in place.”

“Rakuten Mobile is a big supporter of O-RAN principles and has seen the benefit of supply chain diversity in our own network,” said Tareq Amin, Representative Director, Executive Vice President and Chief Technology Officer of Rakuten Mobile. “By combining the spectral efficiency of massive MIMO along with an advanced cloud-based RAN, we are leveraging and introducing advanced innovative technology from both NEC and Altiostar, who are specialists in these respective fields.”