AT&T has experienced recent disruptions in the supply of fiber optic cable, which has caused the company to trim back its planned fiber-to-the-premises (FTTP) buildout for 2021, according to senior EVP and CFO Pascal Desroches.

AT&T had previously said it would build out its fiber network to an additional 3 million homes passed this year. But that’s now been reduced by 1/2 million.

“Since the start of the third quarter, we are seeing dislocation across the board, including in fiber supply. We’re probably going to come in a little bit light of 3 million homes passed, probably around 2.5 million,” Desroches said Tuesday at the Oppenheimer Technology, Internet & Communications Conference, according to this transcript. 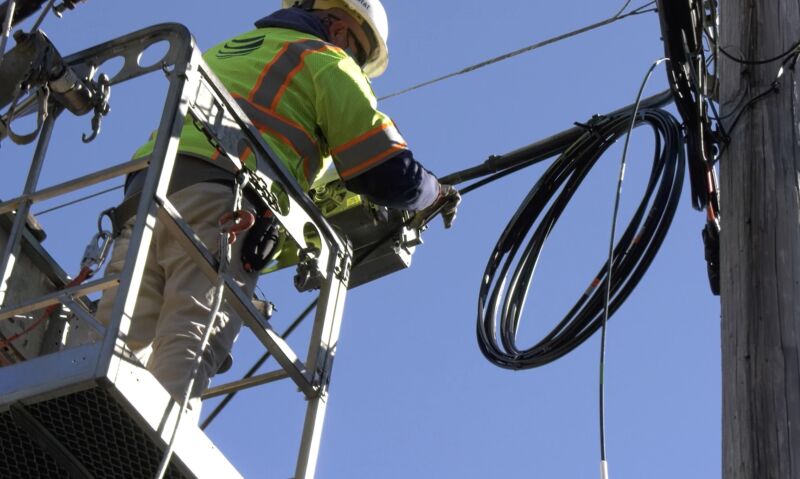 An AT&T technician working on a fiber project

Specifically, this is what Pascal said:

But since the start of the third quarter, we are seeing dislocation across the board, including in fiber supply. And as a result of those dislocations, we had previously provided guidance of 3 million homes past this year (unedited- very bad grammar). We’re probably going to come in a little bit in light of that, probably around 2.5 million. We don’t think it’s going to impact us long term. But I think it’s really important context because if we’re feeling the pain of this, I can only imagine what others in the industry are experiencing.

John Stankey (AT&T CEO) has always been a believer in fiber. I think when he took over he identified that as a priority area because he understood from a technology standpoint, there is no better technology for connectivity. And therefore, in a world where the demands for symmetrical speed are increasing significantly, this is the technology to bet heavily on. And so we have a great position, and we are leaning into adding to that position. So it’s really a function of when you — and I think others are now recognizing it as a result of what you’ve seen in the last year in the pandemic, the need to do what we’re doing now, 2-way communication can only happen with symmetrical speed. So I think everyone has had an aha moment, like we need to deploy fiber. And so we’ve long believed that. John has long believed that, and this is just really leading into that opportunity.

As we deploy fiber, our goal is to get at least 40% penetration on homes passed. And we think in certain markets, we’ll have an opportunity to do better than that. And the other thing that is great about is when you lay fiber, you lay fiber to a community where there is both homes and businesses. So it also helps boost returns in your enterprise business. And so that’s why it is so critical that we roll this out because the ability to grow both your enterprise and your consumer business is attractive. And we think these investments will provide us with mid-teen returns over time.

I know we’re largest fiber purchaser in the country. And we have prices that are at the best and most competitive among the industry. So we feel really good about the ability to secure inventory, fiber inventory and at attractive price points and the ability to execute and the build-out at scale, something that many others don’t have. 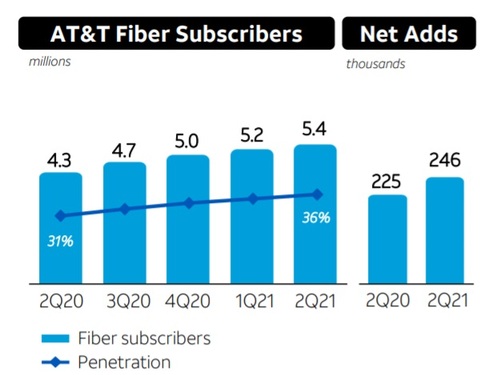 Oppenheimer moderator question: “Can you talk a little bit about where your supply comes from, I guess, both the fiber and the optical components or any other key suppliers? Is that U.S. sourced? Or is it a lot of it outsourced internationally?”

Pascal’s answer: “It is a U.S. company which has locations both domestically and outside the U.S.”  [We suspect that it’s Corning].

AT&T typically has had no problem getting fiber at a low cost, Desroches said. “We’re the largest fiber purchaser in the country and we have prices that are the best and most competitive in the industry,” he said. “We feel really good about the ability to secure fiber inventory at attractive price points and the ability to execute the buildout at scale, something that many others don’t have.”

AT&T expects to catch up to its original fiber-construction estimates in the years after 2021, largely because of what Desroches called its “preferred place in the supply chain” and “committed pricing.” As AT&T said in a news release yesterday, AT&T is “working closely with the broader fiber ecosystem to address this near-term dislocation” and “is confident it will achieve the company’s target of 30 million customer locations passed by the end of 2025.”

AT&T has estimated that nearly 80% of new fiber subscribers are also new AT&T customers, reversing a previous trend that saw a sizable portion of its FTTP customer net adds coming from upgrades of existing AT&T high-speed Internet customers on older VDSL and DSL platforms (which have been largely discontinued).