With a current known pipeline of 314 future new hyperscale data centers, the installed base of operational data centers will pass the 1,000 mark in three years’ time and continue growing rapidly thereafter.

The United States currently accounts for almost 40% of operational hyperscale data centers and half of all worldwide capacity. By a wide margin, it is also the country with the most data centers in the future pipeline, followed by China, Ireland, India, Spain, Israel, Canada, Italy, Australia and the UK.

As the installed base of operational data centers continues to grow each year at double-digit percentage rates, the capacity of those data centers will grow even more rapidly as the average size increases and older facilities are expanded.

By data center capacity the leading companies are the usual suspects:  Amazon, Microsoft, Google and Facebook, though it is the Chinese hyperscalers that are growing the fastest, most notably ByteDance, Alibaba and Tencent.

The companies that feature most heavily in the future new data center pipeline are Amazon, Microsoft, Facebook and Google.  Each has 60 or more data center locations with at least three in each of the four regions – North America, APAC, EMEA and Latin America. Oracle, Alibaba and Tencent also have a notably broad data center presence.

“The future looks bright for hyperscale operators, with double-digit annual growth in total revenues supported in large part by cloud revenues that will be growing in the 20-30% per year range. This in turn will drive strong growth in capex generally and in data center spending specifically,” said John Dinsdale, a Chief Analyst at Synergy Research Group.

“While we see the geographic distribution, build-versus-lease distribution, average data center size and spending mix by data center component all continuing to evolve, we predict continued rapid growth throughout the hyperscale data center ecosystem. Companies who can successfully target that ecosystem with their product offerings have plenty of reasons for optimism.” 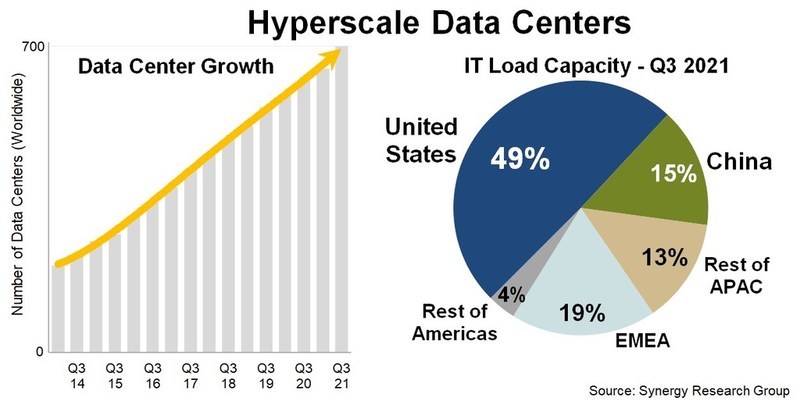 Synergy provides quarterly market tracking and segmentation data on IT and Cloud related markets, including vendor revenues by segment and by region. Market shares and forecasts are provided via Synergy’s uniquely designed online database SIA ™, which enables easy access to complex data sets. Synergy’s Competitive Matrix ™ and CustomView ™ take this research capability one step further, enabling our clients to receive on-going quantitative market research that matches their internal, executive view of the market segments they compete in.

Synergy Research Group helps marketing and strategic decision makers around the world via its syndicated market research programs and custom consulting projects. For nearly two decades, Synergy has been a trusted source for quantitative research and market intelligence.