The Telecom Infra Project (TIP) has formed a new group to speed the introduction of commercial Wi-Fi devices for the 6 GHz band. Broadcom, Cisco and Facebook are leading the creation of the Open Automated Frequency Coordination (Open AFC) Software Group.

The purpose of this new TIP project group is to develop a common reference open source software for an AFC system. The AFC will be used by unlicensed devices in the newly available 6 GHz band to operate outdoor and increased range indoor while ensuring incumbent services are protected.

The US, EU, Canada, and Brazil, among others, have approved or are finalizing the approval of 6 GHz unlicensed spectrum use, opening up a huge bandwidth for Wi-Fi services.

By 2025, the Wi-Fi Alliance estimates that the 6 GHz Wi-Fi will deliver USD 527.5 billion in incremental economic benefits to the global economy [1]. Standard outdoor power operations will be a key part of the value proposition of 6 GHz Wi-Fi and is critical for enabling more affordable wireless broadband for consumer access.

The FCC is the first regulator to enable its use under an AFC, ISED Canada authorized standard power with AFC in May 2021, with others expected to follow. The AFC will enhance Wi-Fi to provide a consistent wireless broadband user experience in stadiums, homes, enterprises, schools, and hospitals.

“The 6 GHz Wi-Fi momentum is unmistakable. In the year following the historic FCC ruling to open up the band for unlicensed access, we already have an entire ecosystem of Wi-Fi 6E devices delivering gigabit speeds indoors. As we work towards closing the digital divide and further realizing the value of the 6 GHz band, AFC-enabled standard power Wi-Fi operation becomes critical. As Wi-Fi 7 comes along, AFC will turbocharge the user experience by enabling over 60 times more power for reliable, low latency, and multi-gigabit wireless broadband both indoors and outdoors. With this vision in mind, Broadcom is excited to join hands with Cisco and Facebook to create the TIP Open AFC Software Group aimed at enabling a cost effective and scalable AFC system,” said Vijay Nagarajan, Vice President of Marketing, Wireless Communications & Connectivity Division, Broadcom.

“The creation of the TIP Open AFC Software Group represents the immense momentum behind unlicensed spectrum and the potential it holds to deliver innovation,” said Rakesh Thaker, VP of Wireless Engineering, Cisco. “Many of the applications and use cases we’re just beginning to dream up with the introduction of Wi-Fi 6 and the 6 GHz spectrum will rely on standard power, greater range and reliability. This software group will play an important role in ensuring those applications can become reality, while also protecting important incumbent services. We’re thrilled to join Broadcom and Facebook on this effort, and to share a vision with TIP of providing high-quality, reliable connectivity for all.”

Facebook developed a proof of concept Open AFC system, which will protect 6 GHz incumbent operations and enable faster adoption of standard power operations in the 6 GHz band. This prototype system will be contributed to the TIP community through today’s launch of the Open AFC Software Group, with the goal of enabling the proliferation of standard power devices in the United States to start, with other markets to follow.

Broadcom and Cisco have committed to driving the industry forward in developing Open AFC to ensure that the code continues to be developed to meet the needs of the industry and regulators, such that an AFC operator could take the code and build upon it for rapid certification.

The vast majority of Wi-Fi use is indoors, but there are situations where people will want to use Wi-Fi outdoors. The use of AFC provides the flexibility for outdoor deployments in open air stadiums and similar venues.

“Bringing AFC technology to the TIP Open AFC Software Group is a huge milestone for the unlicensed spectrum community,” said Dan Rabinovitsj, vice president for Facebook Connectivity. “We are excited to see the contributions and innovations by Open AFC and we look forward to celebrating the widespread adoption of the 6 GHz band, which will rapidly accelerate the performance and bandwidth of Wi-Fi networks around the world”.

David Hutton, Chief Engineer of TIP, said: “The industry is coming together to support 6 GHz for unlicensed use for Wi-Fi and TIP will be providing the forum to contribute to make this happen, supporting regulatory efforts by ensuring that AFC systems are developed under a common code base that is available to all industry stakeholders.”

“Wi-Fi Alliance is leading the development of specifications and test plans that can help ensure that standard power Wi-Fi devices operate in 6 GHz spectrum under favorable conditions, avoiding interference with incumbent devices.”

In this author’s opinion, there are way too many alliances/ fora/ consortiums that produce specifications that are to be used with existing standards.  In this case (IEEE 802.11ax) there is potential overlap amongst amongst groups, which leads to inconsistent implementations that inhibit interoperability.

The added performance brought by custom silicon solutions is crucial in realizing the capabilities and benefits of 5G and delivering on its requirements. This new alliance extends the range of Nokia ReefShark chipsets available for 5G networks and improves the performance and energy footprint of 5G networks. While collaborating with Broadcom, Nokia continues to expand its silicon capabilities and improve the penetration of Reef Shark products in its AirScale radio access network (RAN) portfolio. 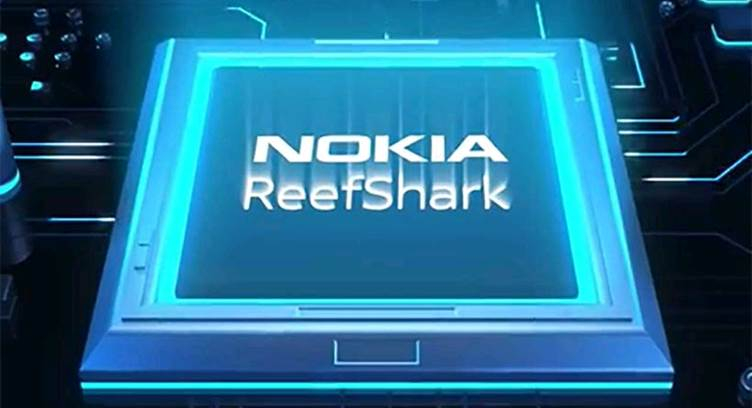 ReefShark reduces size, cost and energy consumption at each cell site, while simultaneously boosting the intelligence and performance of massive MIMO antennas.

The new chipsets are designed for deployment in several building blocks of Nokia’s AirScale radio access system. Reef Shark-based items enable operators to benefit from a smaller size and power consumption but a boost in capacity and overall performance, with a lower total cost of ownership.

“This important collaboration highlights our continued commitment to developing our “5G Powered by ReefShark” chipset portfolio and ensures that our 5G solutions deliver a best-in-class performance to our customers.”

“Nokia and Broadcom’s collaboration accelerates silicon innovation and enables operators and end users to realize the unprecedented benefits of 5G.”

About Nokia
We create the technology to connect the world. Only Nokia offers a comprehensive portfolio of network equipment, software, services and licensing opportunities across the globe. With our commitment to innovation, driven by the award-winning Nokia Bell Labs, we are a leader in the development and deployment of 5G networks.

Our communications service provider customers support more than 6.4 billion subscriptions with our radio networks, and our enterprise customers have deployed over 1,300 industrial networks worldwide. Adhering to the highest ethical standards, we transform how people live, work and communicate. For our latest updates, please visit us online www.nokia.com and follow us on Twitter @nokia.