Charlie Ergen of Dish Network and Michael Dell of Dell Technologies have a plan to open up little-used wireless frequencies to millions of customers with a new 5G service.  However, another billionaire strenuously objects. Elon Musk’s SpaceX filed an objection with the U.S. Federal Communications Commission (FCC), which governs airwaves distribution, saying the “scheme” would wreck his broadband-from-orbit service.

The billionaires paths collide in a swath of spectrum known as the 12 gigahertz band [1.] Ergen and Dell have asked the FCC to allow higher-power traffic in 12 gigahertz airwaves they control in cities around the U.S. That’s 82 markets including New York and Chicago for Dish, and 60 markets including Austin, Texas and Omaha, Nebraska for Dell’s airwaves company, RS Access.

Note 1.  12 GHz (more precisely 12.2-12.7 GHz Band ) is NOT one of the approved frequency bands in the revision to ITU Recommendation M.1036-6, which specifies ALL frequency bands for the TERRESTRIAL component of IMT (including IMT 2020).

The 12 GHz spectrum band is currently restricted to one-way use. License holders include SpaceX, AT&T/DirecTV, Dish and other satellite providers, as well as companies that use the spectrum for downstream fixed wireless communications.

Roberson and Associates found that 1 MHz of 12 GHz spectrum can carry 3.76 times as much data as 1 MHz of 28 GHz spectrum under peak throughput conditions. 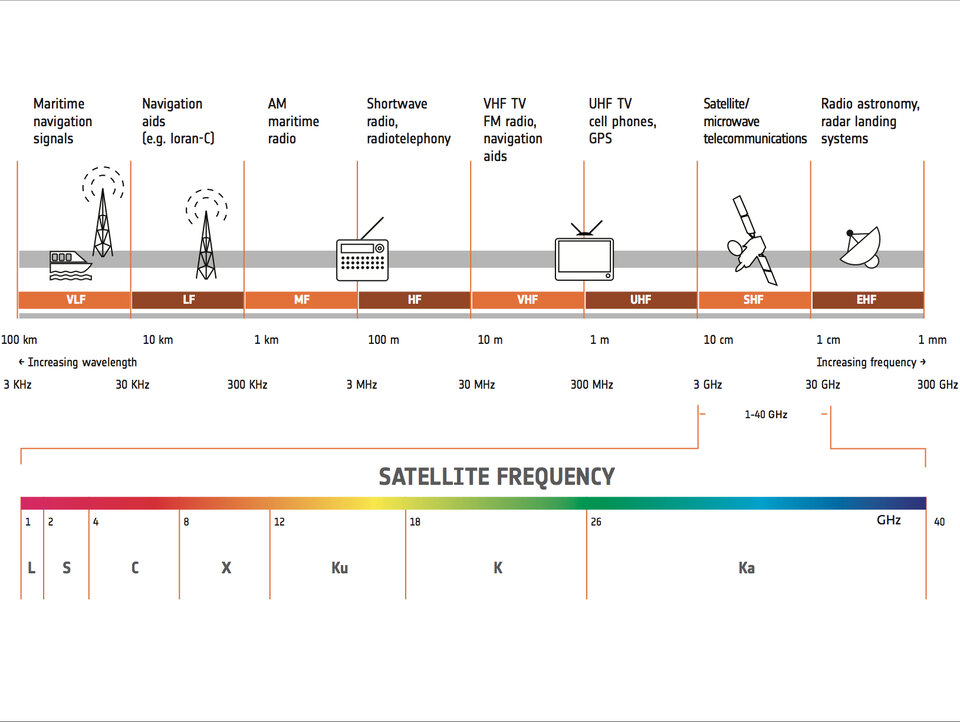 This raucous battle of billionaires stands out on the ordinarily placid docket of the FCC, which is more often limited to detailed technical concerns such as antenna characteristics and signal power/ attenuation. It reflects the fortunes to be made as the U.S. moves toward 5G networks that will be used in many places, depending on the use case. A government auction earlier this year of 5G airwaves brought in $81 billion as the largest U.S. wireless providers snapped up frequencies; another airwaves sale that could net $25 billion is under way.

“It says they ain’t making spectrum no more!” said Tom Wheeler, a former FCC chairman. Spectrum describes the array of frequencies that companies use to offer telecommunications.

Space X also uses the 12 gigahertz frequencies. In FCC filings the company says the proposed higher-power signals could overwhelm the faint broadband signals that travel from its orbiting fleet of 1,500 or more satellites to customers’ rooftop receiving dishes.

Currently, services in the 12 gigahertz band are limited to low power under FCC rules designed to avoid interference with other users. Airwaves with higher power are typically worth more money, since their signals can travel farther and reach more customers. The increased potency can also increase the risk of overpowering other users’ signals.

Dish “has mastered the use of empty promises and attacks on competitors,” SpaceX told the FCC in a filing. Dell’s spectrum-holding RS Access told the FCC that SpaceX is offering a “false premise.” Dish then accused SpaceX of mounting an “attempt to obfuscate the issues.”

The fight has been brewing for at least five years. Dish and other holders of 12 gigahertz airwaves in 2016 asked the FCC to boost power for terrestrial users of the airwaves, citing skyrocketing demand for mobile data. At the time SpaceX’s first Starlink broadband satellite was three years from its 2019 launch. Dish and its partners at the time suggested satellite services should lose rights in the band.

Dell’s investment firm had made its purchase of 12 gigahertz airwaves via RS Access, which reached for influence inside the Beltway. It hired former House telecommunications counsel Justin Lilley, according to an October 2020 filing. Lilley’s roster of clients has included spectrum innovator Ligado Networks, wireless giant T-Mobile US and Facebook.

Lobbying expenses surged. Dell’s MSD Capital with no lobbying expenditures since its founding in 1998, spent $150,000 on lobbying in 2020, according to data compiled by Open Secrets, a non-profit that tracks money in Washington.

Dish, with a longtime presence in Washington, spent $1.8 million lobbying in 2020 and SpaceX spent $2.2 million, with each engaging more than three dozen lobbyists according to Open Secrets.

Dell called then-FCC Chairman Ajit Pai twice, in September and November of 2020. Ergen and Pai spoke in July of 2020. On Dec. 23, Musk called Pai — after two earlier calls between the two, according to FCC disclosure filings.

The FCC began its formal consideration with a 4-0 vote in January 2021, during the closing days of Pai’s tenure. The Republican left the agency following the presidential election, leaving the issue to the current FCC that is split 2-to-2 on partisan lines.

Supporters formed a coalition that includes Dish, Dell, policy groups and two trade groups that include Dish as a member. RS Access presented a 62-page technical study that concluded coexistence between the 5G use and the satellite services can be achieved.

SpaceX, in a filing, said the airwaves are worth far less. Still it said RS Access and Dish were seeking “a windfall” by leveraging airwaves that today are useless.

“You don’t have to have them removed from the band at all,” V. Noah Campbell, chief executive officer of RS Access, said in an interview with Bloomberg. Campbell likened the proposal to a water main that’s been used at low capacity. “We just want the pipe open,” he said.

The spectrum in question could be worth as much as $54 billion if the FCC allows the change, according to a study submitted to the FCC by a Dell owned company.  SpaceX, in a filing, said the airwaves are worth far less. The company said RS Access and Dish were seeking “a windfall” by leveraging airwaves that today are useless.

“This band is really good for 5G.,” Dish Executive Vice President Jeff Blum said in an interview with Bloomberg. “And it would be a missed opportunity if the commission left the status quo in place.”

Big Names Clash over 12 GHz for 5G despite it NOT being included in ITU M.1036 – Frequency Arrangements for IMT

Battle Lines Thicken Over 5G Use of 12 GHz Spectrum, with SpaceX in the Crosshairs

U.S. efforts to develop a 5G network have been fragmented, with many regions of our country seeing no 5G deployment at all. This can threaten digital inclusion work in our communities, restrict innovation-based economic development, and put the U.S. at a competitive disadvantage. Broad accessibility is also critical to the high-tech industry contributing to an open 5G ecosystem, which in turn will grow the digital economy.

Telecom companies are already investing significantly in their 5G networks, with $81 billion of spectrum auctioned off in January and billions more expected in another auction slated for October. But as companies commit to major debt-funded purchases of spectrum they may lack the capital and incentives to build the infrastructure needed to ensure inclusivity.

The real solution lies with investment to modernize the core digital infrastructure, devices and services, centered on a modern open architecture for 5G, but the current industry structure is not aligned with this goal, and the existing ecosystem to enable it is limited.

It’s important to recognize that 5G is much more than just an evolution of 4G. Since 5G has new, higher performance technologies in addition to more traditional wireless access, it has the potential to deliver true Gigabit speed low latency mobile access. To accomplish that, a multitude of additional cellular towers along with a sophisticated network of virtual infrastructure is needed. This will generate a 5G network that is readily accessible, especially to the communities that need it the most.

The Dell CTO says that the U.S. risks falling behind other nations that are making large scale investments in their own 5G networks at a brisk pace. We have the resources and talent to catch up and lead the world in 5G, but first the government and the private sector must work collaboratively to create a foundational 5G wireless ecosystem in the U.S.

In summary, Roese states that “connectivity is economic opportunity and the key to a diverse, competitive workforce. We must come together to provide the equal access to technology and advanced connectivity that will ensure all are empowered to lead the country forward.”

“5G is the next data fabric for the data era. We see the world of edge, cloud and 5G, those three circles, intersecting to a high degree. What we have is the first opportunity to bring a cloud environment to the telco space that hasn’t happened before, and the opportunity is large for us; it’s one of the single biggest opportunities that we see for Dell.”

Dell Technologies And Orange Deliver The Power Of 5G