Global gigabit internet subscriptions are expected to increase to 50 million in 2022, more than doubling from 24 million at the end of 2020, according to a new report from market research firm Omdia (owned by Informa).

The Omdia report states that accelerated fiber deployments are helping to drive an increase in gigabit connectivity.

“There were fewer than 620 million fiber subscriptions globally at the end of 2020, but we expect these to grow to 719 million in 2022, or 62% of total subscriptions.”  The majority of fiber internet subscribers are expected to be in China. 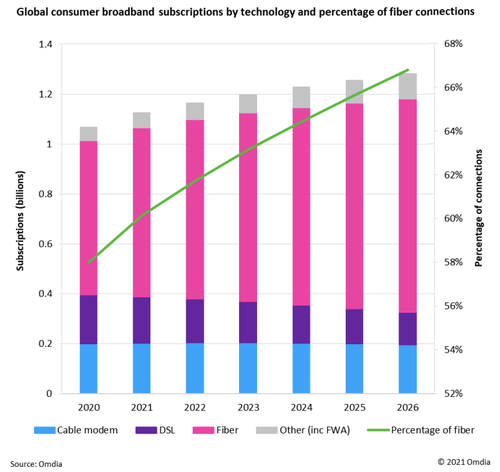 However, Omdia warns that service providers must “carefully consider market demand” for their gigabit strategies and make targeted investments in fiber.

“Service providers need to carefully plan and execute gigabit network rollout, analyzing a number of factors, including infrastructure challenges, market competition, and expected demand,” writes Omdia. “But this does not stop with network rollout – operators need to continually monitor potential competitors and constantly innovate, refresh, and build service offerings so they stay ahead of rivals.”

The analysts also point out the opportunity for vendors in the market who can help service providers build “future proof” networks. “Vendors can offer long-term solutions such as monitoring and automation tools to extend the operator/vendor relationship beyond network rollouts,” the report recommends. 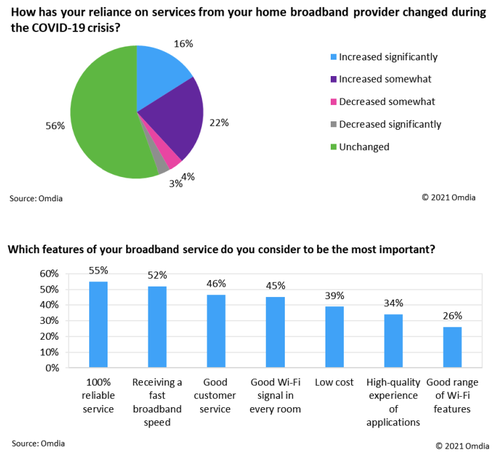 All of this gigabit and fiber growth will impact broadband speeds for years to come. According to Omdia:

–>See table below for the 25 countries with the fastest AVERAGE internet speeds, ranked by Cable.  Note that none of them is close to 1Gbps. 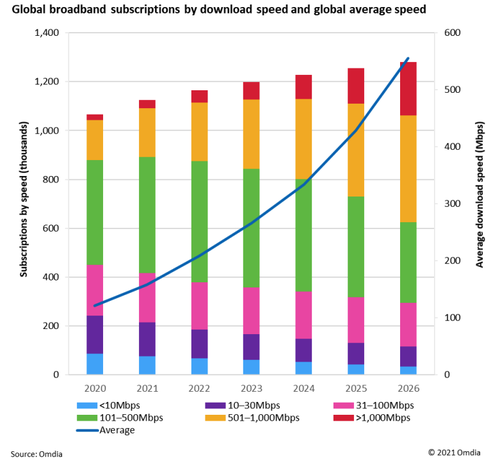 While high-bandwidth entertainment like augmented and virtual reality (AR/VR) and gaming were thought to be the main drivers for ever-faster home broadband speeds in pre-pandemic times, Omdia’s report doesn’t think they are significantly important for gigabit Internet growth, referring to them just once as “other drivers.”

Internet comparison site Cable has ranked the countries with the fastest broadband internet in the world based on over 1.1 billion speed tests across 224 countries and territories.

“The acceleration of the fastest countries in the world has finally plateaued this year as they reach FTTP pure fibre saturation. Increases in speed among the elite performers, then, can be attributed in greater part to uptake in many cases than to network upgrades. Meanwhile, though the countries occupying the bottom end of the table still suffer from extremely poor speeds, 2021’s figures do indicate that the situation is improving,”  said Dan Howdle of Cable.

Here are the 25 countries with the fastest download speeds:

It is the fourth year of the assessment and the latest ranking uses data collected in the 12 months up to 30th June 2021 to evaluate internet speed by country.

Ranked: countries with the fastest internet in the world