According to a new comprehensive, market research report from MoffettNathanson (written by our colleague Craig Moffett), Q4 2021 broadband growth, at +3.3%, “remains relatively robust,” and above pre-pandemic levels of about +2.8%.

Meanwhile, the U.S. fixed wireless access (FWA market) captured ~ 38% share of broadband industry net adds in the fourth quarter of 2021.  Approximately half of Verizon’s FWA customers are coming from commercial accounts, T-Mobile has indicated that about half its FWA customers are coming from former cable Internet subscribers.  FWA’s strong Q4 showing left cable’s flow share at just 66%, about the same as cable’s share of installed US broadband households. “In other words, Cable likely neither gained nor lost share during the quarter, and instead merely treaded water,” Moffett noted.  FWA “has gone from low-level background noise to suddenly a major force, with Verizon and T-Mobile alone capturing more than 300K FWA subscribers in the fourth quarter,” Craig noted.  However, he isn’t sure that wireless network operators will allocate enough total bandwidth capacity for FWA to fully scale. 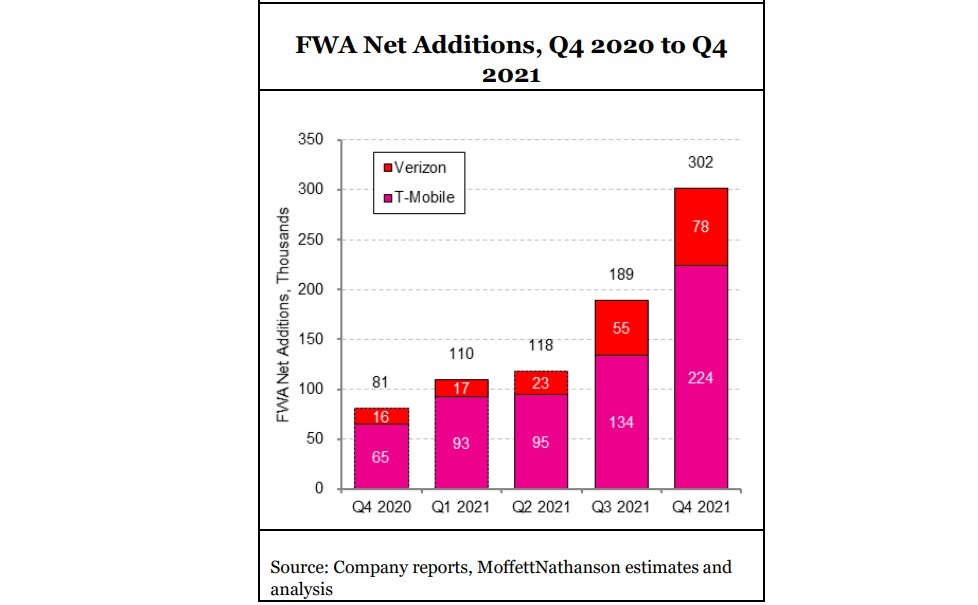 In 2020, a year that witnessed a surge in broadband subs as millions worked and schooled from home, the growth rate spiked to 5%. Here’s a snapshot of the broadband subscriber metrics per sector for Q4 2021:

U.S. broadband ended 2021 with a penetration of 84%  among all occupied households. According to US Census Bureau data, new household formation, a vital growth driver for broadband, added just 104,000 to the occupied housing stock in Q4 2021, versus +427,000 in the year-ago period. Moffett said the “inescapable conclusion” is that growth rates will continue to slow, and that over time virtually all growth will have to stem from new household formation.

Factoring in competition and other elements impacting the broadband market, MoffettNathanson also adjusted its subscriber forecasts for several cable operators and telcos out to 2026. Here’s how those adjustments, which do not include any potential incremental growth from participation in government subsidy programs, look like for 2022:

Are we witnessing a fiber bubble?

“The market’s embrace of long-dated fiber projects rests on four critical assumptions. First, that the cost-per-home to deploy fiber will remain low. Second, that fiber’s eventual penetration rates will be high. Third, that these penetration gains can be achieved even at relatively high ARPUs. And fourth, that the capital to fund these projects remains cheap and plentiful.

None of these assumptions are clear cut. For example, there is an obvious risk that all the jostling for fiber deployment labor and equipment will push labor and construction costs higher. More pointedly, we think there is a sorely underappreciated risk that the pool of attractive deployment geographies – sufficiently dense communities, preferably with aerial infrastructure – will be exhausted long before promised buildouts have been completed.

Revenue assumptions, too, demand scrutiny. Cable operators are increasingly relying on bundled discounts of broadband-plus-wireless to protect their market share. What if the strategy works, even a little bit? And curiously, the market’s infatuation with fiber overbuilds comes at a time when cable investors are growing increasingly cautious about the impact of fixed wireless. Won’t fixed wireless dent the prospects of new overbuilds just as much (or more) as those of the incumbents.”

Moffet estimates that about 30% of the U.S. population has been overbuilt by fiber over the past 20 years, and that the number is poised to rise as high as 60% over the next five years. But the big question is whether there’s enough labor and equipment to support this magnitude of expansion.  “Our skepticism about the prospects for all of the fiber plans currently on the drawing board is not born of doubt that there is enough labor to build it all so much as it is that the cost of building will be driven higher by excess demand,” Moffett explained. “There are already widespread reports of labor shortages and attendant higher labor costs,” he added.

“The outlook for broadband growth for all the companies in our coverage, particularly the cable operators, is more uncertain than at any time in memory. IMarket share trends are also more uncertain that they have been in the past. Cable continues to take share from the telcos, but fixed wireless, as a new entrant, is now taking share from all players. Share shifts between the TelCos and cable operators are suppressed by low move rates, likely due in part to supply chain disruptions in the housing market. This is likely dampening cable growth rates. In at least some markets, returns will likely be well below the cost of capital,” Moffett forecasts.

The telecommunications industry has suffered limited damage as a result of the COVID-19 pandemic.  Revenue figures for most network operators have fallen slightly, but few have encountered anything that is particularly severe or long-lasting. As a result, few telcos have made significant changes to their strategy.

However, some aspects of the telecoms sector have been significantly affected by the pandemic. The most obvious is business services; revenue in this segment declined sharply for most operators in 2020 and prospects for 2021 are uncertain. Operators may have to rethink important parts of their strategies related to these aspects.

The telecoms industry has been affected by the pandemic in many different ways, and have been grouped these into three main categories depicted in the figure below:

Assumptions of a stable economy and a continuation of existing service and technology trends often underpin an operator’s strategic plan. For some of the services offered by operators, business services in particular, these assumptions look outdated and may need a rethink.

Heading into the FCC’s C-Band auction, Wall Street analysts saw Verizon as the leading bidder for 5G wireless radio spectrum. Bidding for licensed spectrum in the telecom industry’s most expensive auction ever reached more than $75 billion on Monday amid speculation over how much each of the big wireless telcos and cable companies have paid.

In a note to clients, analyst/colleague Craig Moffett of MoffettNathanson is assuming that Verizon will end up being the largest buyer at the ongoing auction of mid-band spectrum targeted for new 5G deployments.  As a result, Verizon’s balance sheet will be more heavily burdened and more of their future cash flows will be diverted to debt service so their future profits will be lower.

AT&T, on the other hand, will “be disadvantaged for a generation” if they don’t get a significant chunk of the mid-band spectrum being auctioned.  Craig believes that AT&T was probably “one of the two big bidders that more or less backed away after round 24 or round 38.”

An important issue is “whether “winners” in this auction acquired reasonably uniform contiguous blocks, or whether they instead (worst case scenario) ended up with a patchwork of licenses and a hefty bill to burden the balance sheet. If so, will their footprints be largely erased by subsequent topping bids from others.”

With respect to using the purchased mid-band spectrum for accelerated 5G deployments, Craig wrote: “At best, the huge sums paid here for spectrum risk displacing the capital investment needed to put the acquired spectrum to use. At worst, they risk financially destabilizing one or more players.”

In conclusion, Craig asks if the large amounts of money being spent for an asset (licensed mid-band spectrum) that is best thought of as simply maintaining the status quo will be worth the price paid?  “Again, the most important question is this: is anyone going to change their revenue forecast just because the industry had to spend twice as much as expected to buy spectrum for 5G.”